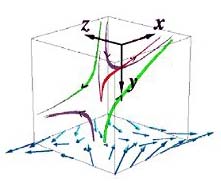 In work that promises new insights into the cosmos and fusion-energy production alike, physicists have reported they have made the first three-dimensional laboratory measurements of magnetic reconnection, the main process by which magnetic fields release energy in the universe.

Magnetic reconnection is the phenomenon in which magnetic energy in a plasma is rapidly converted to heat and jets of energetic particles. This process is thought to heat the solar corona, the outer atmosphere of the sun, to temperatures 1000 times greater than the sun’s surface itself, as well as to accelerate particles to high energies, possibly even to the very high energies of cosmic rays. Magnetic reconnection is also an important process in some experimental fusion energy reactors that use magnetic fields to confine the plasma.

The physical picture of magnetic reconnection is of two strands of magnetized plasma with oppositely directed magnetic field merging together. Until recently, this process has been studied only in two dimensions–theoretically, computationally, and experimentally.

Now, 3D experimental measurements of magnetic reconnection have been made at the Swarthmore Spheromak Experiment (SSX) at Swarthmore College. At SSX, physicists merge rings of magnetized plasma called spheromaks. Compact probes measure up to 600 magnetic field components more than a million times a second. This permits detailed studies of the ever-changing 3D magnetic structures resulting from these experiments. Measurements of the spheromaks reveal a swept and sheared magnetic structure in the reconnection region (see figure).