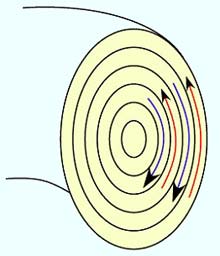 Like rapidly flowing gases and liquids, magnetically confined plasmas in tokamaks and related fusion devices exhibit a high degree of turbulence, which can generally destroy the optimal conditions for producing fusion energy. In a deeply encouraging new result, scientists have experimentally confirmed that turbulence can actually limit its own ability to wreak havoc.

Researchers at the DIII-D tokamak at General Atomics have discovered that turbulence generates its own flows that act as a self-regulating mechanism. These flows, which are predicted theoretically and have been observed in computer simulations, create a “shearing” or tearing action that destroys turbulent eddies, as indicated by the figure. Such flows are like the large-scale zonal jets and patterns seen in the atmospheres of Jupiter and other large planets.

These turbulent flows have been clearly observed in recent experiments at DIII-D by using a special imaging system. The imaging measurements are obtained at a rate of one million frames per second and have a spatial resolution of about 1 cm. Observing and identifying these unique turbulence flows experimentally, and comparing their characteristics with theory, is helping to advance researchers’ understanding of this complex and crucial phenomena taking place in high temperature fusion plasmas.

The roiling turbulence inside tokamaks represents some of the most complex physics on the planet. Using the full power of the world’s largest supercomputers, scientists in separate work have now been able to fully simulate the movement of tokamak particles and heat due to turbulence. Implementing new algorithms to incorporate very complex physics, they included the effects of super-fast electrons and the recent practice of rotating the plasma, like horses in a merry go round, for higher-pressure tokamak operation and higher-energy output. Making it possible to directly compare DIII-D turbulence experiments with numerical calculations for the first time, these simulations may also help greatly in making reliable predictions for larger tokamaks and future commercial-scale fusion reactors.