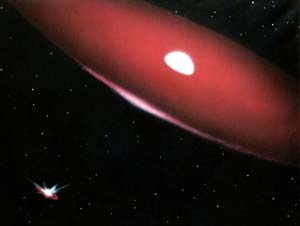 Artist’s impression of a Be Star

Astronomers have been puzzled for decades as to how the rings of hot gas surrounding certain types of star are formed. Now a team of scientists from the Universities of Glasgow and Wisconsin believe they have found the answer. The team studied a type of young, hot star, known as a “Be star”, that has a disk of glowing gas around it, similar to the rings surrounding Saturn. Until now, no one has been able to account for how these rings form but in a paper published this month*, the team suggest an answer.

The gas ring surrounding a Be Star may appear and then disappear, possibly reforming at a later time. Material in the disk is attracted back towards the star by the pull of gravity, but if it has enough energy it can escape into space, contributing to the stellar wind.

The new theory reveals why this material is held in a disk at some distance from the star instead of either being pulled closer or flying away into space.

Deborah Telfer of Glasgow University explains
“Our model relies on the existence of a magnetic field around Be stars producing a ‘Magnetically Torqued Disk’. Magnetic field lines channel stellar wind material leaving the surface of the star down towards the equatorial plane. A disk then forms in the region where particles have sufficient angular velocity to balance gravity. In the outer regions, the weaker magnetic field lines should burst open allowing particles to form part of the general stellar wind.”

Previously, the Wind Compressed Disk Model (Bjorkman and Cassinelli, 1993) was regarded as one of the most successful explanations of circumstellar disks. However, it predicts disks that are out-flowing (i.e. the material moves from the star to the disk and then away into space) and expanding. Yet Be stars are observed to have circumstellar Keplerian disks, meaning that the disks are supported against gravity by rotation rather than gas or radiation pressure.

Deborah has been working with Joseph Cassinelli of Wisconsin on the new model for Be star disks and they are delighted at the success of their results.

These suggest that only a narrow range of types of star would form a detectable Magnetically Torqued Disk and be seen as Be stars.

Heavier stars would require an unreasonably large magnetic field while lighter stars would produce disks too small to be detected. More work is needed to explain every aspect of observational evidence but we may finally be reaching an understanding of what
produces these Saturn-like stars.