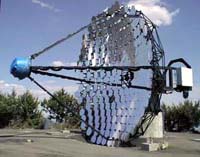 In search of cosmic mayhem

A physicist at Washington University in St. Louis working with scientists at the Smithsonian Institution is unveiling the dark, violent side of the universe.

Using the Whipple Observatory gamma-ray telescope and camera in the Santa Rita Mountains, south of Tucson, the Whipple collaboration, of which Buckley is a member, first discovered astronomical sources of terra-electron volt (TeV) from the Crab Nebula. Like meteor showers, each TeV photon leaves a faint blue streak in the atmosphere that points back to its source. Over the last decade, they also have discovered six occurrences of energetic gamma-ray flares from peculiar galaxies known as Active galaxies or Blazars. “We are learning about the physical conditions inside what are known as relativistic jets, which produce TeV gamma rays, ” said Buckley. “The jets are composed of matter and radiation that move very close to the speed of light, scattering ambient light up to extremely high (TeV) energies.

“Just this June (2002), we discovered enormous flares of TeV gamma rays from an object called 1 ES 1959+650 that lasted for hours. The flares were incredibly rapid, signifying a very compact emission region, consistent with the Black Hole hypothesis.”

In addition to unveiling the nature of the monster that lies at the center of these enigmatic galaxies, the technique of TeV gamma-ray astronomy also holds promise to reveal the nature of the “dark matter” that comprises the majority of our own galaxy.

It is estimated that less than 10 % of the matter in the universe is ordinary matter such as protons, neutrons and electrons. The rest is composed of two dark components: About 30% of the universe appears to be composed of “dark matter” and another 65 % of some new form of “dark energy.” While these two components dominate the mass budget for the universe, their nature is unknown.

“It is widely believed that cold dark matter formed the first structure in the universe, and that galaxies subsequently formed by falling into the gravitational potential wells formed by the dark matter,” Buckley explained. “A dark matter halo with a very high central density should exist in our own galaxy. Favored models for this dark matter predict that annihilation of the dark matter particles should result in monochromatic gamma-ray emission in the energy range 0.1 TeV to 8 TeV. ”

Buckley said that planned experiments may well have the sensitivity to detect this new component of the universe.

Over the last half century new windows on the invisible universe were opened with radio, and x-ray astronomy. In just the last decade, the universe has been revealed in a new, even more extreme form of radiation, terra-electron volt (TeV) gamma rays. These photons are so energetic that no terrestrial particle accelerator can produce them.

A TeV photon has the same energy as an electron accelerated by a trillion volts. While there are no sources of such photons on the Earth, TeV gamma rays appear to be produced by an ever-increasing number of astrophysical sources.

The Whipple Observatory gamma-ray telescope is a 10-meter reflector that images the faint flashes of blue light from the showers of energetic particles produced as individual gamma-ray photons interact in the Earth’s atmosphere.

When an energetic gamma ray interacts in the atmosphere it produces an electron and a positron (the electron’s antiparticle). These go on to liberate more electrons and gamma rays and other matter. An avalanche called an electromagnetic cascade ensues. The particles in this “shower” are moving so rapidly that they emit an electromagnetic shock wave known as Cherenkov radiation, much like a sonic boom emitted by a supersonic jet.

A fast camera on the Whipple telescope takes 20 nanosecond snapshots of the streaks of light produced by each photon. Collectively, these streaks of Cherenkov light point back to the object much like lines of perspective converge at the distant horizon. Buckley and his colleagues analyze these images in detail and produce a picture of the sky at terra-electron volt energies.

One of the most exciting discoveries by the Whipple group is the TeV emission from active galactic nuclei, or AGNs. In these remarkable galaxies, a compact nucleus can outshine the rest of the galaxy by a factor of as much as 100 or 1000. The optical luminosity of the compact central object exceeds what could be produced by thermonuclear fusion, and is believed to result from the accretion of mass into the deep gravitational potential well of a supermassive black hole.

“Measurements of matter swirling around the central objects point to the existence of black holes with the mass of hundreds of millions of suns,” said Buckley. “In many of these sources radio observations reveal jet- like outflows presumably aligned with the rotation axis of the central black hole. The TeV gamma-ray measurements have been used to provide a quantitative measure of the speed of these relativistic outflows, which appear to be traveling as much as 99.98 percent of the speed of light.”

Sustainable processes could replace valuable metals in silicone crosslinking. Silicones are tried and tested in the private and professional domains. In many applications, however, expensive precious metals are required as…

Researchers at IST Austria gain deeper knowledge of plant growth by treating seedlings with painkillers like Aspirin and the like. New study published in Cell Reports. For centuries humans were…