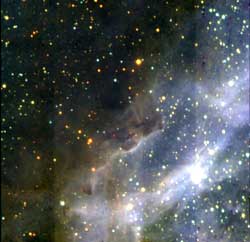 New views of star birth and the heart of a spiral galaxy have been seen by a state-of-the-art astronomical instrument on its first night. The new UKIRT Imaging Spectrometer (UIST) has a revolutionary ability to ’slice’ any object in the sky into sections, producing a three dimensional view of the conditions throughout entire galaxies in a single observation. UIST has just been installed on the United Kingdom Infrared Telescope (UKIRT) in Hawaii.

Project scientist Suzanne Ramsay Howat from the UK Astronomy Technology Centre (ATC) in Edinburgh said “UIST will give astronomers using UKIRT a unique way of viewing the Universe, keeping this telescope at the cutting-edge of science”.

The instrument saw its ’First Light’ on the night of 24th September, when it was trained on the Omega Nebula. This nebula, also called Messier 17, is a gas cloud where new stars are forming. Located 5000 light years from Earth, M17 is a near neighbor and can be studied in exquisite detail with an instrument such as UIST. The intense ultraviolet radiation from young, hot stars blasts the atoms in clouds of interstellar gas, making them glow brightly as seen in the bottom right of the UIST image.

One of the most exciting new features of UIST is its ’image slicer’ or Integral Field Unit (IFU). The IFU ’slices’ the light from an astronomical target into thin sections. Each slice is then spread out to make a spectrum, rather like the rainbows produced when light passes through a prism of glass. Astronomers can use these spectra to investigate the interactions between stars, cosmic dust and gas in complex objects like galaxies.

The image slicer was tested in UIST’s first night on UKIRT. The galaxy NGC1068, 47 million light years from Earth, was chosen for the observations. This galaxy is known to have an active nucleus, or centre, which is a perfect target for the image slicer. The IFU creates an infrared ’data cube’ from the galaxy’s nucleus in a single observation. This can be sliced in one direction to show the appearance of the nucleus at a single infrared wavelength, or at right angles to produce spectra across the entire nucleus.

The UIST team have spent five weeks commissioning and installing the instrument on UKIRT. The telescope is situated atop Mauna Kea on the Big Island of Hawaii, which is one of the best sites in the world for astronomy. This follows five years of construction at the ATC in Edinburgh, where the team overcame many technological challenges.

Dr Ramsay Howat explained “At infrared wavelengths, the ambient heat of the instrument itself creates unwanted background light. To avoid this, the entire 750kg instrument is cooled inside a cryostat to about -200C, just 70 degrees above absolute zero. The dinner plate sized wheels that allow different optical components to be selected have to be rotated to within 1/250 of a degree, and the optical pathways must stay precisely aligned even as the instrument shrinks in the extreme cold.”

At the heart of UIST is an extremely sensitive infrared detector with a million pixels – 16 times more than the previous spectrometer ’CGS4’. UIST combines and improves upon the capabilities of the instruments previously on the telescope.

Dr Andy Adamson, Director of UKIRT, is extremely excited about the future with UIST. “Combining the power of UIST imaging and spectroscopy with the telescope’s excellent image quality will revolutionise observations at UKIRT. We’ll be able to image objects of interest and analyse them spectrally, all with the same instrument.”