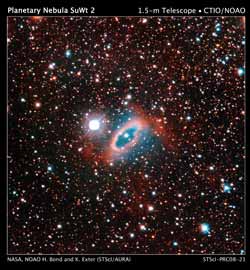 This image of the planetary nebula SuWt 2 reveals a bright ring-like structure encircling a bright central star. The central star is actually a close binary system where two stars completely circle each other every five days. The interaction of these stars and the more massive star that sheds material to create the nebula formed the ring structure. The burned-out core of the massive companion has yet to be found inside the nebula. The nebula is located 6,500 light-years from Earth in the direction of the constellation Centaurus. This color image was taken on Jan. 31, 1995 with the National Science Foundation's 1.5-meter telescope at the Cerro Tololo Inter-American Observatory (CTIO) in Chile. CTIO is part of the National Optical Astronomy Observatory, which has its headquarters in Tucson, Ariz.

A team of stellar astronomers is engaged in an interstellar CSI (crime scene investigation). They have two suspects, traces of assault and battery, but no corpse.

The southern planetary nebula SuWt 2 is the scene of the crime, some 6,500 light-years from Earth in the direction of the constellation Centaurus.

SuWt 2 consists of a bright, nearly edge-on glowing ring of gas. Faint lobes extend perpendicularly to the ring, giving the faintest parts of the nebula an hourglass shape.

These glowing ejecta are suspected to have been energized by a star that has now burned out and collapsed to a white dwarf. But the white dwarf is nowhere to be found.

The mystery deepened when researchers obtained ultraviolet observations in the early 1990's with NASA's International Ultraviolet Explorer satellite, expecting to see signs of a faint but very hot star. But no ultraviolet radiation was detected.

Instead, at the center of the nebular ring are two suspicious characters: a pair of tightly bound stars that whirl around each other every five days, neither one of which is a white dwarf. These stars are hotter than our Sun (their spectral class is A), but they are still not hot enough to make the nebula glow. Only a flood of ultraviolet radiation, such as that from the missing white dwarf, could do that.

The study is being conducted by Katrina Exter and Howard Bond of the Space Telescope Science Institute in Baltimore, Md., and a team of British and American colleagues. Their extensive photometry and spectroscopy of the binary show that both stars are larger than main-sequence stars of their masses. This may imply that they have started to evolve toward becoming red giants. Both stars also appear to be rotating more slowly than expected; they would be expected to always be facing the same sides toward each other, but they do not.

The astronomers suggest a simple explanation for the facts at the scene: the stars at the center of SuWt 2 were born as a family of three, with the A stars circling each other tightly and a more massive star orbiting further out. This allowed room for the massive star to evolve to become a red giant, which only then engulfed the pair of A stars. Trapped inside the red giant in what astronomers call a “common envelope,” the pair spiraled down toward the core, causing the envelope to spin faster. Eventually, the outer layers of the red giant were ejected in the plane of the orbit, producing the ring-shaped nebula seen today.

The unusually slow spins of the two A stars may have been another consequence of their victimization by their massive sibling.

Ultraviolet radiation from the exposed hot core of the red giant would have caused the nebula to glow. If the giant's core were of high enough mass, it would then shrink and cool off rapidly to a faint white dwarf, which might explain its current invisibility.

Their results are being presented today at the 212th meeting of the American Astronomical Society in St. Louis, Mo. Other members of the team are Keivan Stassun (Vanderbilt University, Tenn.), Pierre Maxted and Barry Smalley (Keele University, UK), and Don Pollacco (Queen's University, UK).

The Hubble Space Telescope is a project of international cooperation between NASA and the European Space Agency (ESA) and is managed by NASA's Goddard Space Flight Center (GSFC) in Greenbelt, Md. The Space Telescope Science Institute (STScI) conducts Hubble science operations. The institute is operated for NASA by the Association of Universities for Research in Astronomy, Inc., Washington, DC.