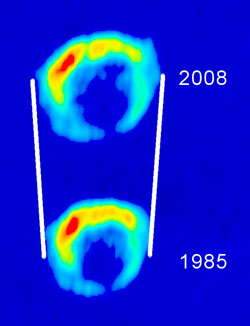 A supernova remnant (SNR) is the material ejected by a supernova, the explosion at the end of the life of a star much more massive than the Sun. In our own Galaxy, the Milky Way, there are about 250 known SNRs and up to now the youngest was thought to be about 340 years old.

Scientists including Dr Green and Dr Stephen Reynolds of North Carolina State University compared an X-ray image of G1.9+0.3 made using the Chandra satellite in 2007 with a radio image made with the VLA in 1985. They found that the SNR expanded considerably over the two decades, indicating it is very young. But the team were not sure whether some of the differences between the X-ray and radio images of G1.9+0.3 simply arose from comparing images made at very different frequencies from very different instruments.

To check their result, the team used the VLA to observe the SNR for a second time so that a direct comparison could be made with the 1985 image. The new observations confirm that G1.9+0.3 is expanding at an unprecedented rate, increasing its size by 15% in the intervening 23 years. Extrapolating backwards in time confirms G1.9+0.3 to be at most 150 years old, which makes it easily the youngest known SNR in our Galaxy and the only one that has been seen at such an early stage of its evolution. Another property of G1.9+0.3 that marks it out as unusual is that, uniquely among Galactic SNRs, it appears to have been increasing in radio brightness over the last few decades.

Although the distance to G1.9+0.3 is not known precisely, it is probably near the centre of our Galaxy. The SNR is obscured by a large amount of gas and dust, which means that Victorian astronomers would not have been able to see the explosion when it took place in the 1850s. Today scientists can observe the X-ray and radio emission from the ongoing aftermath of the explosion, as these penetrate the obscuring material.

Dr Green is delighted to have found such a young SNR. He comments “The discovery that G1.9+0.3 is so young is very exciting. It fits into a large gap in the known ages of supernova remnants, and since it is expanding so quickly, we will be able to follow its evolution over the coming years.”