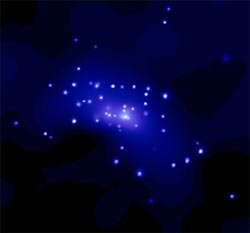 Like ’flower power’ tattoos on aging ex-hippy baby boomers, unexpectedly large numbers of neutron stars and black holes in elliptical galaxies suggest some of these galaxies lived through a much wilder youth. The discovery by NASA’s Chandra X-ray Observatory may require a revision of how elliptical galaxies evolved.

Black holes and neutron stars are the “stellar corpses” of the brightest, most massive and short-lived stars. The presence of numerous neutron stars and black holes shows that these galaxies once contained many very bright, massive stars. This is in marked contrast to the present populations of lower-mass, faint, old stars that now dominate elliptical galaxies.

The black holes and neutron stars found by Chandra in these galaxies appear to be members of binary star systems. The strong pull of gravity from the collapsed star pulls material off the normal star. This material emits large amounts of X-rays as it falls into the black hole or neutron star.

The Chandra observations also show that most of the binary star systems that contain black holes are not scattered randomly among the stars in the elliptical galaxies. Instead, most of the X-ray binaries are located in “globular star clusters,” round balls of stars, containing about one million stars in a region of the galaxy where typically only one would be found.

The high fraction of black hole binaries found in globular star clusters suggests that the black holes captured a single star or pulled it away from its original companion. Normally, the distances between stars in galaxies are too great for capture to occur, but in the extraordinarily dense environment of globular clusters they may be much more common.

“Chandra has shown us that the birthplace of these exotic black hole binary systems are in the dense globular clusters,” said Joel Bregman, a collaborator at the University of Michigan, Ann Arbor.

“Globular clusters appear to be the ’singles bars’ of the stellar world,” said Sarazin, “where a lonely black hole can go to find a companion.”

The observations were made with Chandra’s Advanced CCD Imaging Spectrometer, which was built for NASA by Penn State and the Massachusetts Institute of Technology, Cambridge, Mass. NASA’s Marshall Space Flight Center, Huntsville, Ala., manages the Chandra program for the Office of Space Science, Washington, D.C. TRW, Inc., Redondo Beach, Calif., is the prime contractor for the spacecraft. The Smithsonian’s Chandra X-ray Center controls science and flight operations from Cambridge.