Home / Physics and Astronomy / Quarks and antiquarks at high momentum shake the foundations of visible matter
14.10.2021 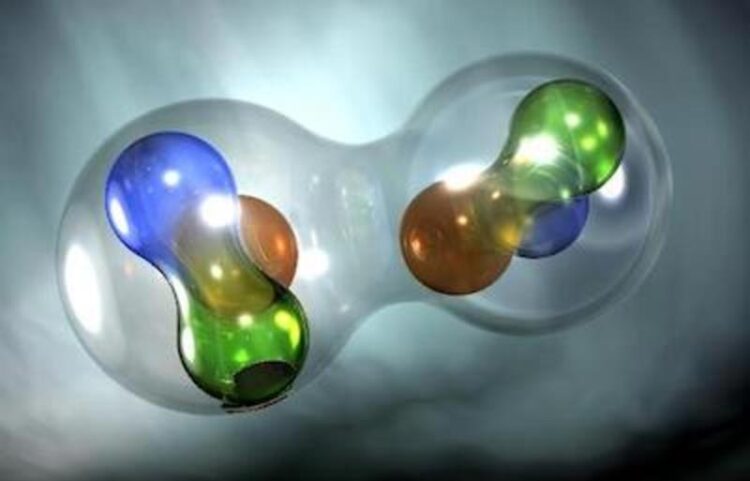 Two independent studies have illuminated unexpected substructures in the fundamental components of all matter. Preliminary results using a novel tagging method could explain the origin of the longstanding nuclear paradox known as the EMC effect. Meanwhile, authors will share next steps after the recent observation of asymmetrical antimatter in the proton.

Both groups will discuss their experiments at DOE’s Thomas Jefferson National Accelerator Facility and Fermilab during the 2021 Fall Meeting of the APS Division of Nuclear Physics. They will present the results and take questions from the press at a live virtual news briefing on October 12 at 2:15 p.m. EDT.

One study presents new evidence on the EMC effect, identified nearly 40 years ago when researchers at CERN discovered something surprising: Protons and neutrons bound in an atomic nucleus can change their internal makeup of quarks and gluons. But why such modifications arise, and how to predict them, remains unknown.

For the first time, scientists have measured the EMC effect by tagging spectator neutrons, taking a major step toward solving the mystery.

“We present results from a new transformative measurement of a novel observable that provides direct insight into the origin of the EMC effect,” said Tyler T. Kutz, a postdoctoral researcher at the Massachusetts Institute of Technology and Zuckerman Postdoctoral Scholar at Tel Aviv University, who will reveal the findings at the meeting.

“The results have major implications for our understanding of the QCD structure of visible matter,” said Efrain Segarra, a graduate student at MIT working on the experiment. The research could shed light on the nature of confinement, strong interactions, and the fundamental composition of matter.

A team from Fermilab found evidence that antimatter asymmetry also plays a crucial role in nucleon properties—a landmark observation published earlier this year in Nature. New analysis indicates that in the most extreme case, a single antiquark can be responsible for almost half the momentum of a proton.

“This surprising result clearly shows that even at high momentum fractions, antimatter is an important part of the proton,” said Shivangi Prasad, a researcher at Argonne National Laboratory. “It demonstrates the importance of nonperturbative approaches to the structure of the basic building block of matter, the proton.”

Prasad will discuss the SeaQuest experiment that found more “down” antiquarks than “up” antiquarks within the proton. She will also share preliminary research on sea-quark and gluon distributions.

“The SeaQuest Collaboration looked inside the proton by slamming a high-energy beam of protons into targets made of hydrogen (essentially protons) and deuterium (nuclei containing single protons and neutrons),” said Prasad.

“Within the proton, quarks and antiquarks are held together by extremely strong nuclear forces—so great that they can create antimatter-matter quark pairs out of empty space!” she explained. But the subatomic pairings only exist for a fleeting moment before they annihilate.

The antiquark results have renewed interest in several earlier explanations for antimatter asymmetry in the proton. Prasad plans to discuss future measurements that could test the proposed mechanisms.

Complimentary registration is available to credentialed press representatives for the express purpose of gathering and reporting news and information from the meeting. If you have not previously obtained APS press credentials (i.e. attended other APS meetings as press or receive the APS journals tip sheet), please submit a request at http://info.aps.org/press.

ABOUT DNP
The Division of Nuclear Physics (DNP), established in 1966, is comprised of scientists and educators who study fundamental problems related to the nature of matter. Nuclear scientists probe the properties of nuclei and nuclear matter and the interactions of their ultimate constituents — quarks and gluons. They also address interdisciplinary questions: the basis of fundamental symmetries in nature, the first moments of the universe, the origin of the elements, education, and the application of nuclei and nuclear techniques to meet societal needs including medical diagnoses and treatment, energy, advanced materials, and Homeland Security. DNP interests have significant overlap with other APS Divisions, Topical Groups and Forums.

ABOUT APS
The American Physical Society (APS) is a nonprofit membership organization working to advance and diffuse the knowledge of physics through its outstanding research journals, scientific meetings, and education, outreach, advocacy, and international activities. APS represents over 55,000 members, including physicists in academia, national laboratories, and industry in the United States and throughout the world. Society offices are located in College Park, Maryland (Headquarters), Ridge, New York, and Washington, DC.