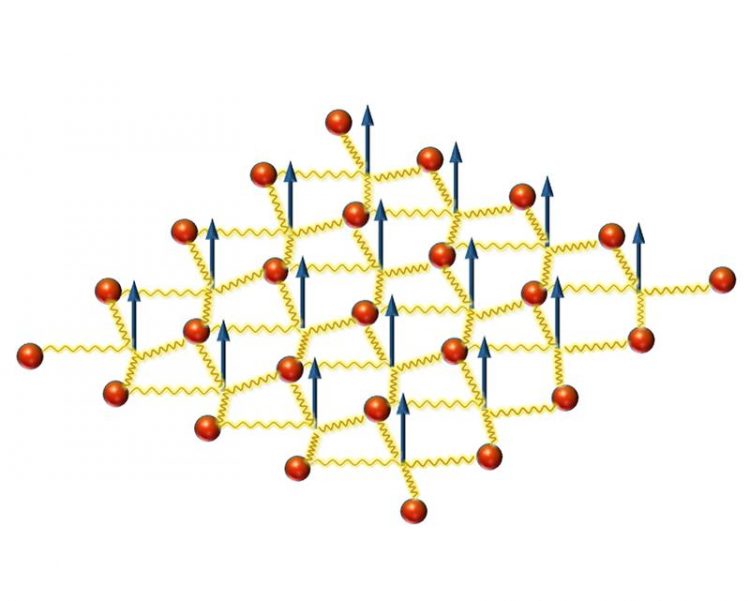 Electrons in a 2D lattice interact with a magnetic field (blue arrows), and its quantum fluctuations via the exchange of photons (yellow), which changes how the electrons move through the lattice. Vasil Rokaj

Electrons moving in a strong magnetic field perform a circular motion due to the Lorentz force, on which electromagnetic induction and the electric motor are based.

In the quantum flatland of atomically thin two-dimensional materials, this leads to weird quantum effects like the integer and the fractional quantized Hall effects, which state that the number of Lorentz-deflected charges are not arbitrary but increase in discrete (quantized) steps.

Despite much progress in the field, the fundamental description of how electrons behave in magnetic fields has remained somewhat incomplete.

“There is a deep problem here. Let’s say I have a giant magnetic coil and generate a field that is the same everywhere in space, the electrons in my quantum sheet should feel the same force everywhere,” says Vasil Rokaj, PhD student in the MPSD Theory Department and lead author of the study. “But standard textbooks treating the magnetic field classically, fail to account for this physical requirement,” he adds.

With a team of researchers led by MPSD Theory Director Angel Rubio and group leaders Michael Ruggenthaler and Michael Sentef, Rokaj and co-author Markus Penz set out to derive new equations that would cure this shortcoming.

“We did not know originally what to expect,” adds Ruggenthaler. “In fact, we were interested in a different problem, namely how a quantized rather than classical field in a so-called cavity affects the electronic motion.”

To achieve this, Rokaj had to use the formalism of quantum electrodynamics, which was first developed in the 1930s and 1940s to describe how electrons and photons interact. When Rokaj wrote down the equations for the electrons in the solid, the team realized that something interesting happened.

“The magnetic field in a coil is composed of photons, so in principle we should be able to also describe the old problem with our new approach,” says Ruggenthaler. “Surprisingly, the quantum uncertainty (or fluctuations) of the field, which is usually not taken into account, helps to restore the fundamental symmetry – that everything should be the same no matter where in space we look.”

Angel Rubio adds: “These efforts prove that we are on the right track by tackling the problem in a fully quantum way.” In his Theory Department, many researchers work on the large-scale problem of how photons change the properties of matter – from novel chemical reactions to materials that might help build future quantum computers.

“This work proves that it is always worthwhile to take a fresh look at old problems, and to start from the basic principles,” says Rubio. “I am sure that further surprises are just waiting to be discovered.”