Quantum Technology: Observation of a unique quantum state of matter 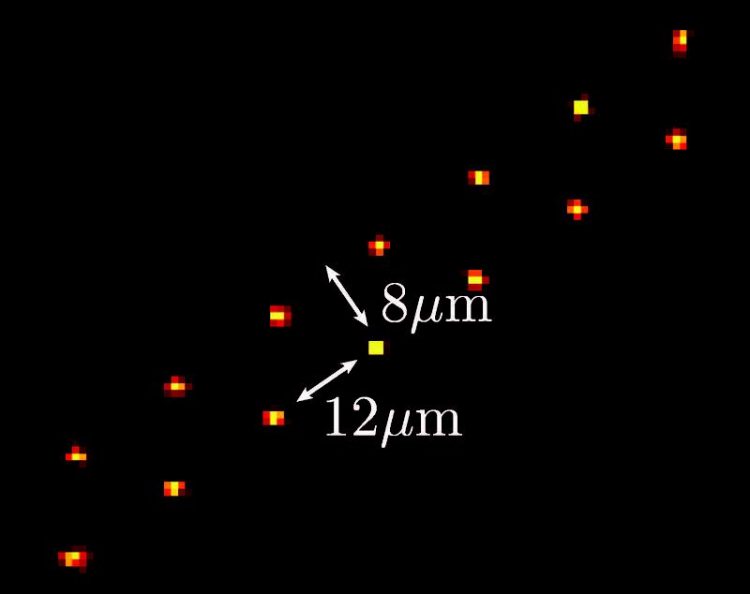 Picture of the artificial setup consisting of 14 individually trapped and accurately placed atoms, which gives rise to the realisatio of the topological phase. Institut d’optique, Palaiseau

Most states of matter are characterized by the concept of spontaneous symmetry breaking, e.g., the periodic arrangement of atoms in a solid breaks the translational symmetry, or Ferromagnets with all the magnetic moments pointing into the same direction break the rotational symmetry.

However, not all states of matter fall into this paradigm, and especially so-called topologcal phases can not be characterized by a broken symmetry. Examples in condensed matter are the integer as well as the fractional quantum Hall state, and topological insulators.

Due to the high control in such an artifical setup over the individual atoms, the unique properties of the topological phase could be direclty probed and observed such as the existence of robust edge states, a characteristic gapped excitation spectrum, as well as the appearance of a string order parameter.

Hans Peter Büchler is professor in theoretical physics and head of the institute for theoretical physics III at the University of Stuttgart. This research on quantum many-body systems in artificial matter and the realization of topolgocal phases is funded by the European Research Council within the ERC project SIRPOL.

Furthermore, this research question is also part of the EU flagship on quantum technologies under the aspect of quantum simulators. The research is performed within a strong collaboration bewteen the theoretical group at the University of Stuttgart and the experimental group lead by Prof. Antoine Browaeys at the Institut d’optique in Palaiseau.

The research results are published in 1st August in Science online as first release:
https://science.sciencemag.org/content/early/2019/07/31/science.aav9105

Prof. Hans Peter Büchler, Head of the institute for theoretical physics III at the University of Stuttgart, 0711 685 64975, buechler@theo3.physik.uni-stuttgart.de