Quantum States in a Nano-object Manipulated using a Mechanical System 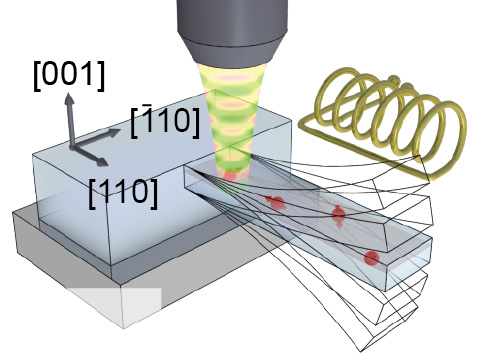 The oscillating resonator influences the electron spin in the nitrogen-vacancy centers (red arrows). Their spin can be efficiently read out by fluorescence microscopy. University of Basel

In previous publications, the research team led by Georg H. Endress Professor Patrick Maletinsky described how resonators made from single-crystalline diamonds with individually embedded electrons are highly suited to addressing the spin of these electrons.

These diamond resonators were modified in multiple instances so that a carbon atom from the diamond lattice was replaced with a nitrogen atom in their crystal lattices with a missing atom directly adjacent. In these “nitrogen-vacancy centers,” individual electrons are trapped. Their “spin” or intrinsic angular momentum is examined in this research.

When the resonator now begins to oscillate, strain develops in the diamond’s crystal structure. This, in turn, influences the spin of the electrons, which can indicate two possible directions (“up” or “down”) when measured. The direction of the spin can be detected with the aid of fluorescence spectroscopy.

In this latest publication, the scientists have shaken the resonators in a way that allows them to induce a coherent oscillation of the coupled spin for the first time. This means that the spin of the electrons switches from up to down and vice versa in a controlled and rapid rhythm and that the scientists can control the spin status at any time. This spin oscillation is fast compared with the frequency of the resonator. It also protects the spin against harmful decoherence mechanisms.

It is conceivable that this diamond resonator could be applied to sensors – potentially in a highly sensitive way – because the oscillation of the resonator can be recorded via the altered spin.

These new findings also allow the spin to be coherently rotated over a very long period of close to 100 microseconds, making the measurement more precise. Nitrogen-vacancy centers could potentially also be used to develop a quantum computer. In this case, the quick manipulation of its quantum states demonstrated in this work would be a decisive advantage.