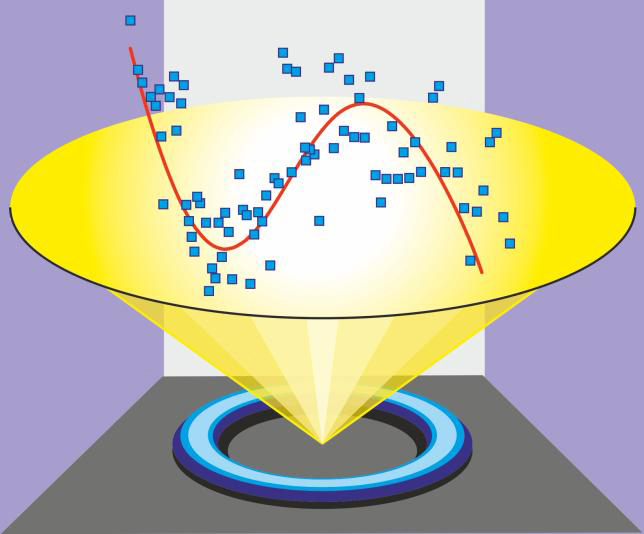 Prior to this work, ideal light sources (such as perfect lasers) were thought to emit as much light as excited in them via pumping.

Physicists from Marburg, Dortmund, St. Petersburg, and Notre Dame, USA, investigated optically pumped quantum-dot lasers and demonstrated that the pumping induces a quantum memory between the pump excitation and the light emission. Beating expectations, this quantum-memory was shown to induce intensity oscillations on top of the expected linear output.

Even more striking, these oscillations could be either suppressed or significantly enhanced via the quantum fluctuations of the pump laser. This breakthrough will be published in the coming issue of the journal Physical Review Letters on 15.08.2014.

The theoretical research team led by Professors Mackillo Kira and Stephan W. Koch from the Philipps-Universität Marburg analyzed the unusual experimental results obtained by the team led by Prof. Manfred Bayer. The experimentalists used laser light to excite quantum dots inside a microcavity and carefully recorded the subsequent light emission.

The first author of this publication, M.Sc. Christian Berger, explains “The input pump laser excites the quantum dot to a higher energy level; afterwards, the excitation returns to the ground state by emitting light, defining the output”.

Surprisingly, the authors found that the output intensity does not scale linearly with the input intensity as expected earlier. Instead, the output power was oscillating around its expected value. They could even show that the oscillations can be completely controlled by the quantum-optical fluctuations of the optical pump, which highlights the significance of this extraordinary discovery.

Mackillo Kira elaborates, “We were thrilled after we verified the quantum-optical control of these oscillations which is a genuine property of our quantum-optical spectroscopy concept”. Manfred Bayer continues, “Based on these findings, we could unambiguously identify the observed oscillations as a genuine quantum-memory effect”. Stephan W. Koch explains the origin of the quantum memory, “The light emission remembers the earlier excitation process via quantum memory – this effect is intimately connected with entanglement, which is one of the manifestations of the fundamental quantum weirdness”.

This work is connected with the ongoing effort to convert quantum-world phenomena to tangible applications. The existence of quantum-memory effects and their quantum-optical control may hold the key to developing lasers whose quantum-optical aspects become completely user defined. Such laser sources would be extremely useful in quantum-information science and in quantum spectroscopy which aims to control quantum processes of complex systems via the quantum aspects of light.

Professors Mackillo Kira and Stephan W. Koch teach semiconductor quantum optics and theoretical semiconductor physics at the Philipps-Universität Marburg. In February, they identified a new quasiparticle, the dropleton, with the help of quantum-optical spectroscopy.