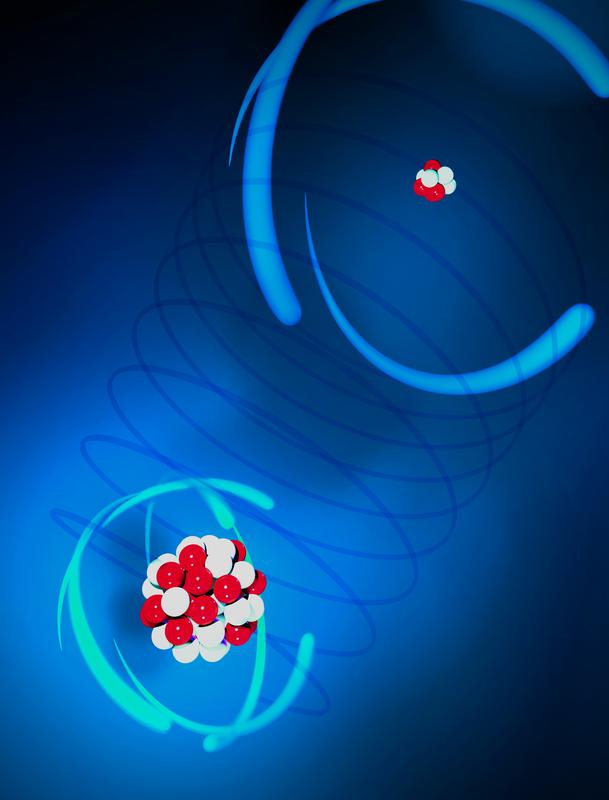 Due to their high positive charge, the outer electrons of the atomic shell are more strongly bound to the atomic nucleus. They are therefore less sensitive to perturbations by external electromagnetic fields. On the other hand, compared to neutral and singly charged atoms, the effects of special relativity and quantum electrodynamics as well as the interaction with the atomic nucleus are considerably enhanced.

Highly charged ions are therefore ideal systems for accurate atomic clocks that can be used to test fundamental physics. The outer electrons in these systems serve as sensitive “quantum sensors” for effects such as previously unknown forces and fields. Since every single element of the periodic table provides as many charge states as there are electrons in the atomic shell, there exists a vast variety of atomic systems to choose from.

To date, however, established measurement techniques as used in optical atomic clocks could not be applied to highly charged ions. The main obstacle manifests already in the process of their production: a large amount of energy is required in order to remove a significant number of electrons from the atoms, and the ions then exist in the form of a plasma as hot as the Sun itself.

However, the most precise and accurate experiments require the exact opposite: the lowest possible temperatures and well-controlled ambient conditions in order to reduce shifts and broadening of the spectral lines to be measured. This is hindered by the fact that highly charged ions cannot be directly laser-cooled, and conventional detection methods cannot be applied due to their atomic structure.

Physicists from the Physikalisch-Technische Bundesanstalt and the Max Planck Institute for Nuclear Physics in Heidelberg have now combined individual solutions to each of these problems in a worldwide unique experiment at the QUEST Institute for Experimental Quantum Metrology in Braunschweig. They isolated a single highly charged ion (Ar¹³⁺) from a hot plasma ion source and stored it together with a singly charged beryllium ion in an ion trap.

The latter can be laser-cooled very efficiently and through the mutual electrical interaction the temperature of the entire ion pair can be reduced. Eventually, this so-called “sympathetic cooling” forms a two-ion crystal that completely “freezes” into the quantum mechanical ground state of motion at an equivalent temperature of only a few millionths of a degree above absolute zero.

Using an ultrastable laser the scientists precisely resolved the spectral structure of the Ar¹³⁺ ion in a measurement procedure similar to that used in state-of-the-art clocks. For this, they applied the concept of quantum logic, in which the spectroscopy signal is coherently transferred from the highly charged ion to the beryllium ion by means of two laser pulses.

The quantum state of the beryllium ion is much easier to determine via laser excitation. “Descriptively, the beryllium ion ‘eavesdrops’ on the state of the less communicative highly charged ion and reports to us about its state”, explains Piet Schmidt, head of the collaboration. “Here, we have improved the relative precision for highly charged ions by a factor of one hundred million compared to traditional spectroscopy,” adds Peter Micke, research assistant at the QUEST Institute and first author of the paper.

Combining all these methods establishes a very general concept that can be applied to most highly charged ions. The beryllium ion can always be used as a so-called logic ion and the production process of the highly charged ions in the plasma with subsequent isolation of a single ion is independent of the choice of the atomic type and the charge state.

José Crespo, head of the group at the Max Planck Institute for Nuclear Physics, emphasizes: “This experiment opens up an unprecedented, extremely extensive area of atomic systems to be used in precision spectroscopy as well as for future clocks with special properties.” For basic research, the great variety of these new, tailored “quantum sensors” enables a promising investigation of fundamental questions: Is our standard model of particle physics complete? What is dark matter? Are fundamental constants really constant?