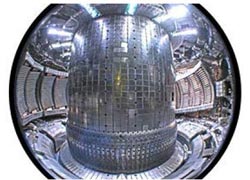 The tiled walls inside the Alcator C-Mod tokamak might say they've been scarred by sudden disruptions in the hydrogen fuel that periodically impacts them. MIT researchers are discovering ways to spread out the focused energy from these disruptions so that the vessel walls are not damaged.<br><br>Credit: M. Garrett<br>

In the quest for fusion energy on earth, researchers use magnetic fields to insulate hot plasma from the walls of the chamber to maintain the reaction and prevent damage to interior surfaces.

In the tokamak, a leading contender to achieve a sustained fusion burn, electrical currents flowing in the plasma inside the doughnut-shaped vacuum chamber can become unstable if the plasma current or pressure gets too high or the control system breaks, leading to a sudden termination of the discharge.

This sudden termination, called a disruption, can produce concentrated heating and mechanical forces on a section of the interior surface, forcing the plant to shut down for repairs.

Researchers at MIT's Plasma Science and Fusion Center (PSFC), General Atomics, Oak Ridge National Laboratory, University of Washington, and the University of California, San Diego, believe that if the intense energy of these disruptions could be uniformly spread out around the interior of the vessel, the plasma could be prevented from melting the wall—a necessity for the next-step fusion device, ITER, under construction in Cadarache, France. Several groundbreaking experiments at the Alcator CMod tokamak at MIT and the DIII-D tokamak in San Diego are guiding the way towards better protection for the vessel walls during disruptions.

Scientists at Alcator C-Mod and DIII-D investigating plasma disruptions have discovered that injecting gases heavier than the background hydrogen fuel (such as argon or neon) just before an impending disruption will spread the resulting energy around the vessel.

However, the Alcator C-Mod team found that the argon or neon does not uniformly spread out quite enough to prevent damage. Sometimes the heat load is still asymmetric, concentrated in one sector of the device. Even using multiple injection sites around the vessel does not necessarily improve the asymmetry, and sometimes heightens it (Olynyk, 2012 APS DPP). To explain this unexpected result, computer models (Izzo, 2012 APS DPP) indicated that internal instabilities within the plasma should determine the radiation asymmetry rather than the distribution of gas injectors.

The DIII-D team has for the first time tested the theory that internal plasma instabilities determine the radiation asymmetry. The team used 3D magnetic fields to “lock” the plasma instability in one direction or another. They found that by varying the direction in which the instability locked, they could reproducibly change the amount of energy deposited at a given location within the vessel, as expected from the computer. Moreover, no indication of the expected localized heating around the gas injector itself was found. The DIII-D results show that simply increasing the number of gas injectors does not alleviate radiation asymmetry during disruption mitigation. The results do, however, suggest that rotating the instability could spread the heat more evenly.

Using rotation to lower the heat load to the walls is exactly what was discovered at the Alcator C-Mod tokamak. The Alcator C-Mod team has discovered that the plasma can spontaneously rotate rapidly during a portion of the disruption known as the “quench.” The rotation appears to be driven by smaller-scale instabilities, and the rotation ends up moving the radiating regions around the vessel quickly and thus lowering the average heat load. Future research will determine if we can control or encourage this spontaneous rotation, and thus distribute the heat more uniformly to the wall.