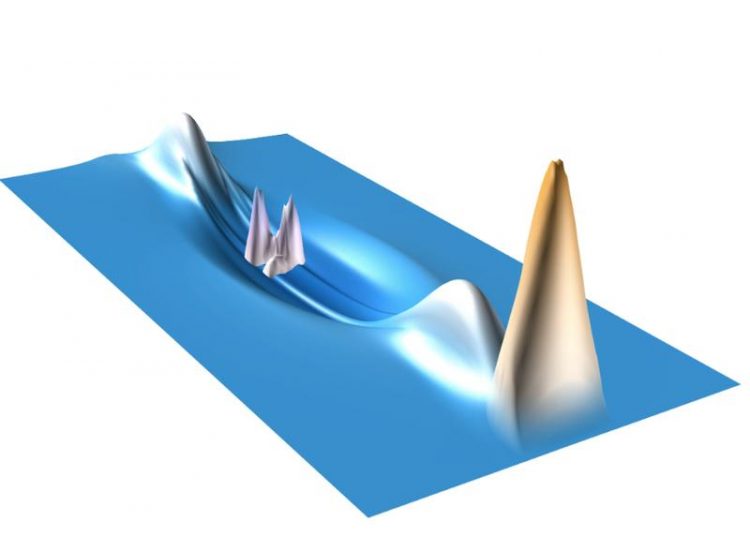 Electrons surfing a wave: A proton beam (boat) generates waves in a plasma. Surfers (electrons) can ride these waves and gain energy in the process. OSIRIS/IST, Portugal

It is already possible to foresee that the information from existing accelerator experiments is limited. Many unresolved questions regarding the structure of matter or the origin of the universe can only be answered if particles collide at even higher energies.

The current record holder is the Large Hadron Collider (LHC) – with a circumference of 27 kilometers it accelerates protons to an energy of up to 13 teraelectronvolts. The record for electrons is around 100 gigaelectronvolts.

In order to reach even higher energies, particularly for electrons, larger installations would have to be built. A smaller, more economical alternative is offered by a completely new concept: This is based on the observation that a plasma, a mixture of charged particles, can establish and maintain strong electric fields.

Objective: To accelerate electrons on a plasma wave

This is what the AWAKE project will take advantage of. “In simple terms, a proton beam generates waves in the plasma – similar to the wake of a speedboat in water,” explains Allen Caldwell, AWAKE spokesperson and Director at the Max Planck Institute for Physics. “If electrons are added, they are accelerated in the oscillating plasma field.”

Although the principle is not new, it has thus far been possible to achieve these plasma modulations only with the aid of lasers or electrons. “With AWAKE, we have shown for the first time that we can also achieve this effect with protons,” says Caldwell. The advantage of protons: Bundles of protons transport significantly more energy. This means that electrons accelerate over a longer distance and gain energy in the process.

“By this means, we have heralded a new era for the development of innovative accelerator technologies,” says Caldwell with confidence. The AWAKE experiment has been set up at the CERN nuclear research center, where a proton beam from an earlier experiment can be used. The current experiment is the result of three years of intense development work. The plasma cell had already been installed at the beginning of this year.

The plan for 2017 is to investigate the interaction between proton beam and plasma field in more detail. The AWAKE research collaboration then plans initial experiments to accelerate electrons on the plasma wave. By the end of 2018, the next longer stop of the LHC, acceleration fields in the range of one gigaelectronvolt per meter, are to be generated.