PPPL findings: Discoveries from fusion to astrophysics at global gathering 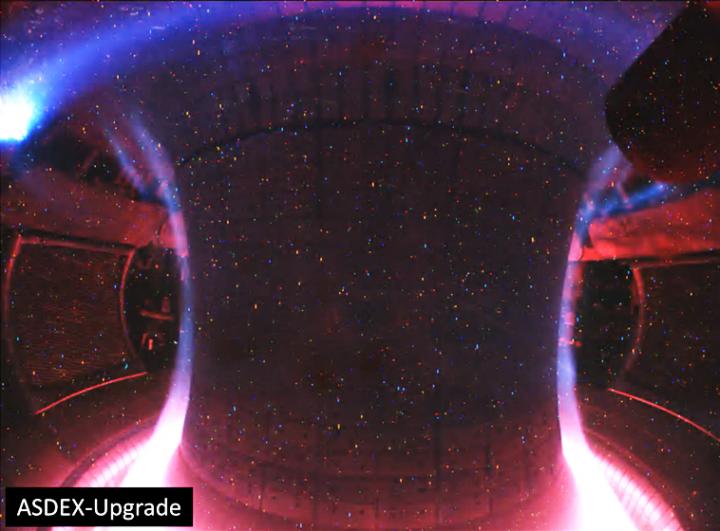 Among events during the week was announcement of new APS Fellows, a recognition for outstanding achievement that no more than one-half of one percent of the more than 55,000 APS members receives.

New Fellows this year include Stefan Gerhardt, head of research operations and deputy director of the recovery project for the National Spherical Torus Experiment Upgrade (NSTX-U), the flagship fusion facility at PPPL.

Invited talks by PPPL scientists ranged from a method for controlling waves that limit the efficiency of fusion plasmas to a surprising discovery about astrophysical plasmas. Talks included those summarized here:

Fusion combines light elements in the form of plasma — the hot, charged state of matter composed of free electrons and atomic nuclei — to generate massive amounts of energy. One way that scientists help heat the plasma is by injecting beams of energetic particles to provide enough energy for the particles to overcome mutual repulsion and fuse together.

However, the injected particles could produce waves that cause plasma energy to leak out of the magnetic fields that confine it. It is therefore beneficial to the development of fusion energy to suppress the waves that drive particles from the confining magnetic fields, cooling the plasma and helping to quench the fusion reactions.

PPPL researchers led by physicist Jeff Lestz have developed new mathematical tools to forecast when the waves will be present and could cool the plasma. The tools predict that a second beam injected at a different angle from the original beam can suppress the effect of the waves, providing new methods for maintaining the plasma's confinement. Such a second beam has been installed on the NSTX-U at PPPL.

The physicists ran detailed computer simulations to model experiments in which the waves were observed. The results broadly agreed with data from experiments on the predecessor of the NSTX-U. The mathematical tools not only explain observations of the waves in past experiments, but also indicate how to turn off one type of wave using different mixtures of the two beams on NSTX-U that inject energetic particles at different angles.

Magnetic reconnection, in which magnetic field lines tear, come back together and release large amounts of energy, gives rise to auroras, solar flares and geomagnetic storms that can disrupt cell phone service and electric grids on Earth. A major challenge in the study of magnetic reconnection is bridging the gap between these large-scale astrophysical scenarios and small-scale experiments done in a lab.

PPPL researchers led by graduate student Jackson Matteucci have overcome this barrier through a combination of clever experiments and cutting-edge simulations. In doing so, they have uncovered a previously unknown role for a universal process called the “Biermann battery effect,” which turns out to impact magnetic reconnection in unexpected ways.

The Biermann battery effect, a possible seed for the magnetic fields that pervade the universe, generates an electric current that produces these fields. The surprise findings, made through computer simulations show that the effect can play a significant role in the reconnection occurring when the Earth's magnetosphere interacts with astrophysical plasmas. The effect first generates magnetic field lines, but then reverses roles and cuts them like scissors slicing a rubber band. The sliced fields then reconnect away from the original reconnection point. These results bridge the gap between laboratory experiments and astrophysical processes and can improve efforts to understand the universe.

Many of the most dramatic events in the solar system — the spectacle of the Northern Lights, the explosiveness of solar flares, and the destructive impact of geomagnetic storms — are driven in part by fast magnetic reconnection.

Astrophysicists have long puzzled over whether this mechanism can occur in the cold, relatively dense regions of interstellar space where stars are born. Such regions are filled with partially ionized plasma, a mix of free charged electrons and ions and the more familiar neutral, or whole, gas atoms. Magnetic reconnection in these regions might dissipate magnetic fields and stimulate star formation.

PPPL physicists led by Jonathan Jara-Almonte have developed a model and simulation that show that fast reconnection can indeed occur in partially ionized systems. These findings can help guide the understanding of how reconnection may differ between fully ionized and partially ionized plasma, and how it might affect the formation of stars.

Discovered: An improved method for producing fusion in compact devices

A major factor in the size and cost of a fusion reactor is how fast the hot plasma that fuels fusion reactions leaks away its energy. Experiments on the National Spherical Torus Experiment (NSTX) at PPPL have produced the Enhanced Pedestal (EP) H-mode, a high-energy confinement regime that is desirable for a future compact reactor.

The EP H-mode has excellent confinement, is free of edge localized mode (ELM) instabilities, and demonstrates improved control over the purity of the plasma compared with other H-mode regimes on NSTX that also are free of ELMs. In this talk, physicist Devon Battaglia describes how an increase in the loss of colder particles from the plasma can be a good thing that leads to the desirable EP H-mode. The increased loss significantly slows the loss of the highest-energy ions, improving overall energy confinement.

Researchers most often observed the EP H-mode on NSTX following a positive feedback loop initiated by an ELM instability. These observations provide the first description of the mechanisms that produce the EP H-mode, enabling the projection of this attractive scenario to the NSTX Upgrade (NSTX-U) and future compact fusion reactors.

Before performing experiments in doughnut-shaped fusion facilities called tokamaks, physicists apply boron-rich gas to a tokamak's interior surfaces to prevent impurities from interfering with fusion reactions. This technique involves risk — the gas is both toxic and explosive, forcing evacuation of the buildings that house tokamaks before the process can begin.

Experiments conducted on the DIII-D National Fusion Facility that General Atomics operates, and on the ASDEX-Upgrade in Germany, have demonstrated what could be a better way to prevent impurities. The experiments show that injection of boron powder coats the interior surfaces of a tokamak as thickly as does boron gas, with similar benefits but without the dangers, says PPPL physicist Alessandro Bortolon who is stationed at DIII-D.

Use of the powder can also be far more convenient. The solid material can be applied at the time of experiments, whereas application of the gas must be done well in advance.

The success of the multinational ITER project, which aims to demonstrate the practicality of fusion energy, hinges on the ability of researchers to suppress Edge Localized Modes (ELMs), a type of plasma instability. These ELMS can be so violent as to damage the inner, plasma-facing walls of the ITER tokamak.

To avoid ELMs, ITER plans to apply what are called resonant magnetic perturbations (RMPs) to the magnetic field that confines the superhot plasma. While RMPs have been tested in several current tokamaks, a full understanding of the impact of the perturbations remains elusive.

Scientists at PPPL have now performed large-scale computer simulations to improve this understanding and develop predictive capabilities to guide experiments. Recent findings by physicist Robert Hager have demonstrated with unprecedented fidelity how RMPs influence the transport of particles and heat in the plasma and the deposit of energy on the reactor walls. These findings allow detailed comparison with experimental data to support development of more accurate models for RMP-driven plasma transport and improve guidance for the suppression of ELMs in ITER.

Accurate prediction of the escape of heat from the superhot core of fusion plasmas will be needed for next-generation fusion reactors based on the spherical tokamak design. Spherical reactors are shaped like cored apples rather than the doughnut-like shape of more widely used conventional tokamaks, and tend to produce higher beta –a key measure of plasma performance.

Using state-of-the-art simulations, physicist Juan Ruiz Ruiz has predicted heat loss in the National Spherical Torus Experiment (NSTX). These predictions agree well with the heat loss measured in actual NSTX experiments. Further agreement with experiments on the upgraded NSTX-U and the Mega Ampere Spherical Tokamak (MAST) in the United Kingdom could demonstrate the ability of the simulations to forecast the loss of heat — and therefore the performance — of future spherical tokamaks.

Close link between forms of plasma behavior seen throughout the universe

This is because turbulent behavior in thin layers of electric current brings magnetic field lines closer together and increases the chances for reconnection to occur. Understanding this previously unsuspected relationship could provide insight into solar phenomena such as coronal mass ejections that arise from magnetic reconnection and can threaten communications systems on Earth.

Improving understanding of the vast plasma structures between galaxies

Magnetic fields occur throughout the universe, including within the intracluster medium (ICM), the vast plasma structures that permeate clusters of galaxies. Scientists conjecture that these magnetic fields are generated by the turbulent plasma dynamo — the swirling of plasma at the juncture of plasmas that move at different speeds.

Most studies of this dynamo focus on plasma in which particles frequently interact. However, particles in ICM plasmas rarely collide, leaving current models unable to accurately predict ICM behavior.

PPPL physicist Denis St- Onge has now used computer simulations and mathematical calculations to show that dynamos in collisionless systems rely on plasma instabilities and display unique characteristics. Detailed understanding of dynamos in these conditions could lead to improved comprehension of the origin of magnetic fields in the vast intracluster medium.

PPPL, on Princeton University's Forrestal Campus in Plainsboro, N.J., is devoted to creating new knowledge about the physics of plasmas — ultra-hot, charged gases — and to developing practical solutions for the creation of fusion energy. The Laboratory is managed by the University for the U.S. Department of Energy's Office of Science, which is the single largest supporter of basic research in the physical sciences in the United States and is working to address some of the most pressing challenges of our time. For more information, visit energy.gov/science.