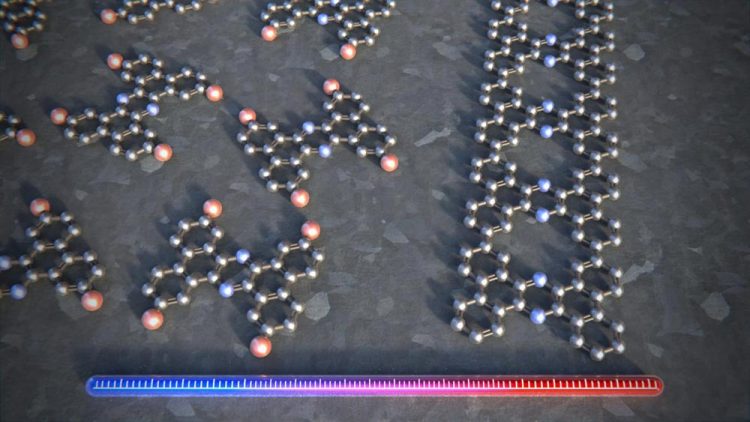 The individual building blocks are heated on a silver surface in order to synthesize a porous graphene ribbon that exhibits semiconducting properties and a ladder-like structure. In each rung of the ladder, two carbon atoms have been replaced with nitrogen atoms (blue). Credit: University of Basel, Department of Physics Usage Restrictions: Only to be used in reporting on research by the University of Basel

Now, a team of researchers led by the physicist Professor Ernst Meyer of the University of Basel and the chemist Dr. Shi-Xia Liu from the University of Bern have succeeded in producing the first graphene ribbons whose crystal lattice contains both periodic pores and a regular pattern of nitrogen atoms.

The structure of this new material resembles a ladder, with each rung containing two atoms of nitrogen.

In order to synthesize these porous, nitrogen-containing graphene ribbons, the researchers heated the individual building blocks step by step on a silver surface in a vacuum. The ribbons are formed at temperatures up to 220°C.

Atomic force microscopy allowed the researchers not only to monitor the individual steps in the synthesis, but also to confirm the perfect ladder structure – and stability – of the molecule.

Using scanning tunneling microscopy, the scientists from the Department of Physics and the Swiss Nanoscience Institute (SNI) at the University of Basel also demonstrated that these new graphene ribbons were no longer electrical conductors, like pure graphene, but actually behaved as semiconductors.

Colleagues from the Universities of Bern and Warwick confirmed these findings by performing theoretical calculations of the electronic properties. “The semiconducting properties are essential for the potential applications in electronics, as their conductivity can be adjusted specifically,” says Dr. Rémy Pawlak, first author of the study.

From the literature, it is known that a high concentration of nitrogen atoms in the crystal lattice causes graphene ribbons to magnetize when subjected to a magnetic field.

“We expect these porous, nitrogen-doped graphene ribbons to display extraordinary magnetic properties,” says Ernst Meyer. “In the future, the ribbons could therefore be of interest for applications in quantum computing.”