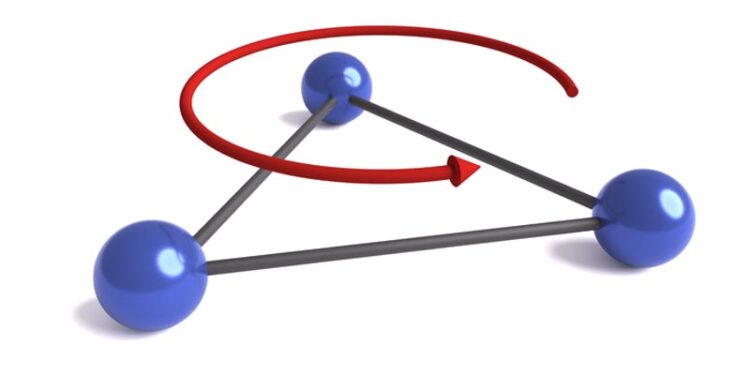 Directional circulation of current around a triangle of atoms due to a synthetic magnetic field.
Credit: Andy Wild

Physicists from Exeter and Zaragoza have created a theory describing how non-reciprocity can be induced at the quantum level, paving the way for non-reciprocal transport in the next generation of nanotechnology.

A pair of theoretical physicists, from the University of Exeter (United Kingdom) and the University of Zaragoza (Spain), have developed a quantum theory explaining how to engineer non-reciprocal flows of quantum light and matter. The research may be important for the creation of quantum technologies which require the directional transfer of energy and information at small scales.

Reciprocity, going the same way backward as forward, is a ubiquitous concept in physics. A famous example may be found in Newton’s Law: for every action there is an equal and opposite reaction. The breakdown of such a powerful notion as reciprocity in any area of physics, from mechanics to optics to electromagnetism, is typically associated with surprises which can be exploited for technological application. For example, a nonreciprocal electric diode allows current to pass in forwards but not backwards and forms a building block of the microelectronics industry.

In their latest research, Downing and Zueco provide a quantum theory of non-reciprocal transport around a triangular cluster of strongly interacting quantum objects. Inspired by the physics of quantum rings, they show that by engineering an artificial magnetic field one may tune the direction of the energy flow around the cluster. The theory accounts for strong particle interactions, such that directionality appears at a swathe of energies, and considers the pernicious effect of dissipation for the formation of non-reciprocal quantum currents.

The research may be useful in the development of quantum devices requiring efficient, directional transportation, as well for further studies of strongly interacting quantum phases, synthetic magnetic fields and quantum simulators.

Charles Downing from the University of Exeter explains: “Our calculations provide insight into how one may instigate directional transport in closed nanoscopic lattices of atoms and photons with strong interactions, which may lead to the development of novel devices of a highly directional character”.

“Non-reciprocal population dynamics in a quantum trimer” is published in Proceedings of the Royal Society A, a historic journal which has been publishing scientific research since 1905.