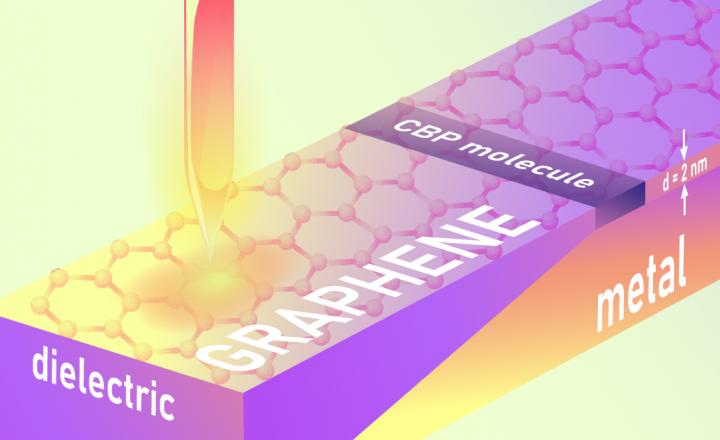 Shown in violet, the wedge-shaped piece of dielectric material is 2 nanometers thick at its narrowest and is bordered by a sheet of graphene above and a piece of electrically conductive metal below. The needle of a near-field microscope excites regular, "unfocused" plasmons in graphene away from the tapered part of the wedge Credit: Daria Sokol/MIPT Press Office

Nondestructive analysis of molecules via infrared spectroscopy is vital in many situations in organic and inorganic chemistry: for controlling gas concentrations, detecting polymer degradation, measuring alcohol content in the blood, etc.

However, this simple method is not applicable to small numbers of molecules in a nanovolume. In their recent study, researchers from Russia and Spain propose a way to address this.

A key notion underlying the new technique is that of a plasmon. Broadly defined, it refers to an electron oscillation coupled to an electromagnetic wave. Propagating together, the two can be viewed as a quasiparticle.

The study considered plasmons in a wedge-shaped structure several dozen nanometers in size. One side of the wedge is a one-atom-thick layer of carbon atoms, known as graphene. It accommodates plasmons propagating along the sheet, with oscillating charges in the form of Dirac electrons or holes.

The other side of the V-shaped structure is a gold or other electrically conductive metal film that runs nearly parallel to the graphene sheet. The space in between is filled with a tapering layer of dielectric material — for example, boron nitride — that is 2 nanometers thick at its narrowest (fig. 1).

Such a setup enables plasmon localization, or focusing. This refers to a process that converts regular plasmons into shorter-wavelength ones, called acoustic. As a plasmon propagates along graphene, its field is forced into progressively smaller spaces in the tapering wedge.

As a result, the wavelength becomes many times smaller and the field amplitude in the region between the metal and graphene gets amplified. In that manner, a regular plasmon gradually transforms into an acoustic one.

“It was previously known that polaritons and wave modes undergo such compression in tapering waveguides. We set out to examine this process specifically for graphene, but then went on to consider the possible applications of the graphene-metal system in terms of producing molecular spectra,” said paper co-author Kirill Voronin from the MIPT Laboratory of Nanooptics and Plasmonics.

The team tested its idea on a molecule known as CBP, which is used in pharmaceutics and organic light emitting diodes. It is characterized by a prominent absorption peak at a wavelength of 6.9 micrometers. The study looked at the response of a layer of molecules, which was placed in the thin part of the wedge, between the metal and graphene.

The molecular layer was as thin as 2 nanometers, or three orders of magnitude smaller than the wavelength of the laser exciting plasmons. Measuring such a low absorption of the molecules would be impossible using conventional spectroscopy.

In the setup proposed by the physicists, however, the field is localized in a much tighter space, enabling the team to focus on the sample so well as to register a response from several molecules or even a single large molecule such as DNA.

There are different ways to excite plasmons in graphene. The most efficient technique relies on a scattering-type scanning near-field microscope. Its needle is positioned close to graphene and irradiated with a focused light beam.

Since the needle point is very small, it can excite waves with a very large wave vector — and a small wavelength. Plasmons excited away from the tapered end of the wedge travel along graphene toward the molecules that are to be analyzed.

After interacting with the molecules, the plasmons are reflected at the tapered end of the wedge and then scattered by the same needle that initially excited them, which thus doubles as a detector.

“We calculated the reflection coefficient, that is, the ratio of the reflected plasmon intensity to the intensity of the original laser radiation. The reflection coefficient clearly depends on frequency, and the maximum frequency coincides with the absorption peak of the molecules. It becomes apparent that the absorption is very weak — about several percent — in the case of regular graphene plasmons.

When it comes to acoustic plasmons, the reflection coefficient is tens of percent lower. This means that the radiation is strongly absorbed in the small layer of molecules,” adds the paper's co-author and MIPT visiting professor Alexey Nikitin, a researcher at Donostia International Physics Center, Spain.

After certain improvements to the technological processes involved, the scheme proposed by the Russian and Spanish researchers can be used as the basis for creating actual devices. According to the team, they would mainly be useful for investigating the properties of poorly studied organic compounds and for detecting known ones.

The MIPT Center for Photonics and 2D Materials, which incorporates the Laboratory of Nanooptics and Plasmonics, pursues global leadership in the fields of active plasmonics, 2D-material optoelectronics, and quantum optoelectronics. The center's primary objectives are developing and implementing a brand-new type of nanosized optoelectronic devices and components with a broad range of applications: electronic components, nanosensors, biosensors, nanolasers, quantum communication lines, energy efficient optical devices, etc. The center is headed by Valentyn Volkov (nano@phystech.edu).