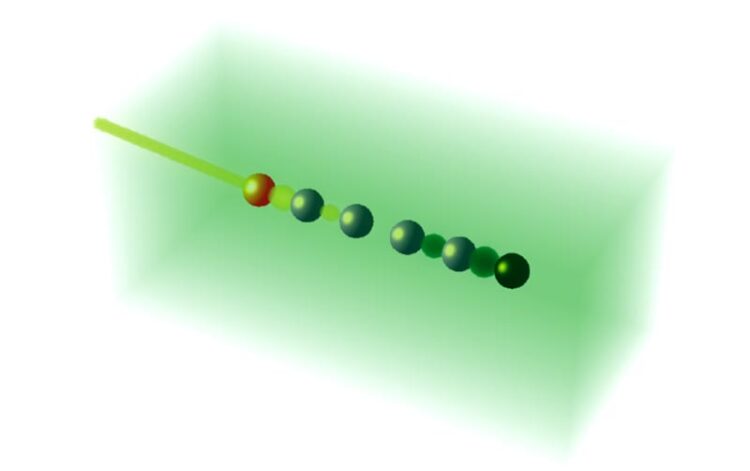 Physicists from Exeter and Trondheim have developed a theory describing how space reflection and time reversal symmetries can be exploited, allowing for greater control of transport and correlations within quantum materials.

Two theoretical physicists, from the University of Exeter (United Kingdom) and the Norwegian University of Science and Technology (in Trondheim, Norway), have built a quantum theory describing a chain of quantum resonators satisfying space reflection and time reversal symmetries. They have shown how the different quantum phases of such chains are associated with remarkable phenomena, which may be useful in the design of future quantum devices relying on strong correlations.

A common distinction in physics is between open and closed systems. Closed systems are isolated from any external environment, such that energy is conserved because there is nowhere for it to escape to. Open systems are connected to the outer world, and via exchanges with the environment they are subject to energy gains and energy losses. There is an important third case. When the energy flowing in and flowing out of the system is finely balanced, an intermediate situation between being open and closed arises. This equilibrium can occur when the system obeys a combined symmetry of space and time, that is when (1) switching left and right and (2) flipping the arrow of time leave the system essentially unchanged.

In their latest research, Downing and Saroka discuss the phases of a quantum chain of resonators satisfying space reflection and time reversal symmetries. There are principally two phases of interest, a trivial phase (accompanied by intuitive physics) and a nontrivial phase (marked with surprising physics). The border between these two phases is marked by an exceptional point. The researchers have found the locations of these exceptional points for a chain with an arbitrary number of resonators, providing insight into the scaling up of quantum systems obeying these symmetries. Importantly, the nontrivial phase allows for unconventional transport effects and strong quantum correlations, which may be used to control the behaviour and propagation of light at nanoscopic length scales.

This theoretical study may be useful for the generation, manipulation and control of light in low-dimensional quantum materials, with a view to building light-based devices exploiting photons, the particles of light, as workhorses down at sizes around one billionth of a meter.

Charles Downing, from the University of Exeter, commented: “Our work on parity-time symmetry in open quantum systems further emphasises how symmetry underpins our understanding of the physical world, and how we may benefit from it”.

Vasil Saroka, from the Norwegian University of Science and Technology, added: “We hope that our theoretical work on parity-time symmetry can inspire further experimental research in this exciting area of physics”.

“Exceptional points in oligomer chains” is published in Communications Physics, an open access journal from the Nature Portfolio.