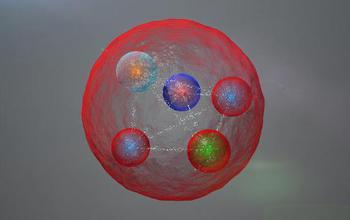 Now that NSF-funded researchers have discovered the long-sought pentaquark, their next step is to study how quarks are bound together within this remarkable particle. They could be bound together tightly, as seen in this image. Credit: CERN

CERN's Large Hadron Collider announced Tuesday that researchers discovered a remarkable class of particles known as pentaquarks that could reshape scientists' understanding about the properties of matter.

Physicists have been searching pentaquarks for almost 50 years, but the research group that made the discovery, a Syracuse University team funded by the National Science Foundation (NSF), wasn't specifically looking for them. According to Syracuse physicist Sheldon Stone, graduate student Nathan Jurik was studying the decay of a different particle when the pentaquark was detected.

“We asked a graduate student to examine what we thought was an uninteresting and minor source of background events, just in case it happened to be a nasty source of experimental noise,” Stone told Symmetry Magazine. “He did it begrudgingly but came back with a big smile on his face because there was a huge and unexpected signal. We told him to forget about what he was working on and focus on this instead.”

Atoms, and the protons and neutrons that make up their nuclei, are familiar terms in science. But quarks are even smaller particles–the building blocks of protons, neutrons and other subatomic particles known as baryons.

Baryons, including protons and neutrons, are composed of three quarks. A pentaquark is something different–a “composite state” that groups four quarks and one antiquark, the associated antimatter particle for a quark. Studying composite states can give scientists additional insight into the properties of ordinary baryons.

“Benefitting from the large data set provided by the LHC, and the excellent precision of our detector, we have examined all possibilities for these signals, and conclude that they can only be explained by pentaquark states,” said LHCb physicist Tomasz Skwarnicki of Syracuse University, whose research group was a leader in the analysis. “More precisely the states must be formed of two up quarks, one down quark, one charm quark and one anti-charm quark.”

The discovery was made by the CERN Large Hadron Collider b-quark (LHCb) experiment group , one of several ongoing particle physics experiments at the laboratory. LHCb studies antimatter and its relationship to matter. The group has submitted a paper reporting its findings to the journal Physical Review Letters.

U.S. participation in the experiment is funded entirely by NSF, which supports the research through nine awards to scientists from Syracuse University, the University of Maryland College Park, the Massachusetts Institute of Technology and the University of Cincinnati working at the Large Hadron Collider.

“The pentaquark is not just any new particle,” said LHCb spokesperson Guy Wilkinson. “It represents a way to aggregate quarks, namely the fundamental constituents of ordinary protons and neutrons, in a pattern that has never been observed before in over fifty years of experimental searches. Studying its properties may allow us to understand better how ordinary matter, the protons and neutrons from which we're all made, is constituted.”

Years' worth of other experiments searching for pentaquarks have proved inconclusive, leading some scientists to question their existence. LHCb's research looked for the particles from many perspectives, with all results pointing to the same conclusion. The group found the pentaquarks by examining the decay of a particular kind of baryon, known as Lambda b.

“While existence of pentaquarks was speculated on since the beginning of the quark model in 1964, it has taken 51 years to find a solid experimental evidence for their existence,” Skwarnicki said. “A serious of dubious experimental claims of their discoveries over a decade ago, which were not confirmed by subsequent measurements, made many physicists doubt their existence. The observation by the LHCb collaboration reverses this trend and will lead to a better understanding of quark formations created by nuclear forces, with possible implications in astrophysics.”

The group's next step will be to study how, exactly, quarks are bound together in pentaquarks–loosely or tightly. The answer to that question will play a key role in determining what pentaquarks can teach about the composition of ordinary matter.