Scientists blow their own trumpet

Brass instrument makers could soon be using the latest technology to refine the manufacturing of trumpets and cornets. An improved way of taking internal measurements of musical instruments, published today in the Institute of Physics journal, Measurement Science and Technology, has been developed by scientists at the University of Edinburgh, the Open University and Smith-Watkins Brass.

In a trumpet or cornet the musical qualities of the instrument, for example the tone, response and intonat 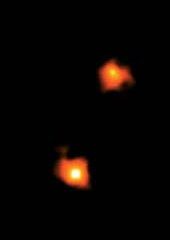 One lump of rock is revealed as two in the distant Kuiper belt.

The stand-offish dance of two asteroids at the outer reaches of the Solar System is captivating astronomers. The two rocky objects, discovered locked in mutual orbit, could tell us about the properties of the far-flung Kuiper belt.

Christian Veillet and his team 1 studied an object called 1998 WW31 in the Kuiper belt, a sparsely populated region of space beyond the orbit of Neptune. The object w 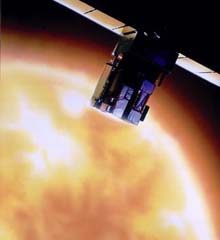 In SOHO&#146;s pictures, watch a comet passing near the Sun

Between now and Saturday, 20 April, you can follow via the Internet the progress of the new-found Comet SOHO-422. Usually, comets seen by the SOHO spacecraft quickly burn up in the Sun’s hot atmosphere. This one won’t, so there is still time to monitor its progress.

Like most of the hundreds of comets found with the ESA-NASA sun-watching spacecraft, SOHO-422 was first noticed by an amateur astronomer. Pictures from SOHO are made available, freely and rapidly, on the Internet. Peop 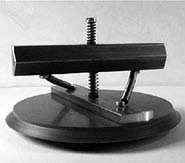 A simple top converts foghorn noise to one-way spin. The device raises the hope that useful energy could be collected from ambient sounds. Normally, random vibrations, which physicists and engineers call noise, produce useless random motion. You can’t move a cart from A to B by shoving it randomly in every direction.

But in the new device, made by Yaroslav Zolotaryuk of the Technical University of Denmark in Lyngby and colleagues

The first steps in a new method of detecting landmines by determining the presence of tiny quantities of the explosive TNT (trinitrotoluene) are described in research published today in the Institute of Physics publication Journal of Physics D. Markus Nolte, Alexei Privalov and Franz Fujara of Darmstadt Technical University in Germany, together with Jurgen Altmann of Dortmund University and Vladimir Anferov from the Kalingrad State University in Russia, describe in the journal how they have devised a 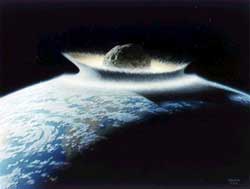 In the past five weeks two asteroids have passed close by Earth, at distances of 1.2 and 3 times the distance to the Moon. Another asteroid has recently been shown to be on course for a collision with Earth in 2880.

Monitoring known asteroids allows astronomers to predict which may collide with Earth. But that is only true for the asteroids we know of. What about those that lie in the asteroid blind spot between the Sun and Earth? The European Space Agency is studying ways in which its miss

Flares illuminate the secret life of a quiescent black hole

Astronomers probing the intimate details of apparently quiescent stellar black holes have discovered that in reality they are dynamic, lively places, subject to flares that briefly illuminate the whole of the gas disc around the black hole. Their observations are helping to build up a picture of precisely where X-rays are generated in the gas as it heats up to extreme temperatures and swirls around under incredible gravitational forces before cascading into the black hole itself. On Friday 12 April,

Galaxies were once thought of as `island universes` evolving slowly in complete isolation. This is now known not to be the case. By using the world`s most powerful X-ray observatories, UK astronomers are discovering that most of these gigantic star systems interact with each other in a wide variety of ways.

During the UK National Astronomy Meeting in Bristol on Thursday 11 April, Dr. Andrew Read (University of Birmingham) will present new results from the Chandra and XMM-Newton spacecraft ab 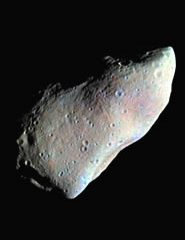 There are twice as many asteroids between Mars and Jupiter as previously believed, according to the latest study. But the probability of a stray one colliding with Earth remains negligible.

Edward Tedesco of US research company TerraSystems Inc.and Francois-Xavier Désert of the Astrophysical Laboratory in Grenoble, France, found that there are between 1.1 million and 1.9 million asteroids swarming round the ’main asteroid belt’1.

An unprecedented source of planetary nebulae, the disk-like relics of elderly, dying stars, has been discovered in the southern part of our Milky Way galaxy.

With about 1000 planetary nebulae found so far and many more still to be discovered, the number of aged stars in their death throes revealed by the new survey is rapidly overtaking the entire population discovered over the entire sky during the last 75 years.