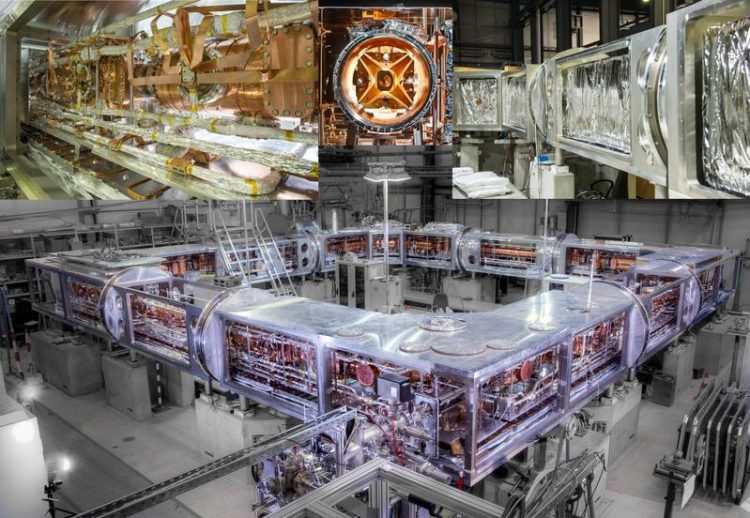 Insights into the Cryogenic Storage Ring during the construction pase. Photos: MPIK

After years of development and construction work, physicists of the MPI for Nuclear Physics now for the first time succeeded to hold negatively charged molecules, namely hydroxide ions (OH–), at a few degrees above absolute zero orbiting inside their novel storage ring and perform experiments with them.

The CSR (Cryogenic Storage Ring), a world-wide unique electrostatic storage ring for ions, is designed for operation at lowest temperatures. It enables researchers to investigate the chemistry of interstellar clouds on Earth and to gain fundamental insight into the ‘inner life’ of molecules.

It took almost three weeks until the new ultra-cold Cryogenic Storage Ring (CSR) had reached a temperature of –265C, just a few degrees above absolute zero. During the cool-down phase the pressure inside the ring dropped to an estimated value of 10^–13 mbar, which is sixteen orders of magnitude lower than atmospheric pressure and very difficult to measure precisely.

Shortly afterwards a first milestone was accomplished by storing positively charged argon ions (Ar+) in the ring. These initial tests gave the green light for the first experiment. “We produced hydroxyl ions (OH–) in our ion source, injected them into the CSR and stored them on a stable orbit for more than 10 minutes – this alone constitutes a great success for our team”, explains Andreas Wolf, one of the experimental physicists who have been driving the development of the CSR, “however, now we had to find out whether the stored ions are really cooling down to interstellar temperatures.”

To this end a tunable laser system is used. The stored OH– ions are exposed to the laser beam, which can detach the extra electron and produce neutral OH radicals. The neutral OH particles are no longer stored by the electromagnetic fields of the ring – owing to the lack of an electric charge – and thus are ejected from the stable orbit and recorded by a dedicated detector.

Depending on the frequency of the laser (corresponding to the color of the light) the neutralization process addresses different energy levels of the OH– ions, indicating how much internal energy the ion possessed before it interacted with the laser light.

A first evaluation of the experimental data revealed that not only the internal vibrations of the OH– ions had decayed, but that also the rotational excitation of the majority of the stored OH– ions had reached the lowest quantum state, indicating that the ions are indeed cooling down to interstellar temperatures.

“It really appears that our new ‘machine’ is living up to all of our expectations” Klaus Blaum, director and head of the “Stored and Cooled Ions” division at MPIK, is pleased to report. “The CSR will be able to realize its full potential in our forthcoming experiments on the chemistry of interstellar space” adds Holger Kreckel, group leader of the ERC-financed ASTROLAB project at MPIK.

The commissioning of the CSR constitutes the successful completion of a novel technological realization of an ultra-cold storage ring at MPIK. “With its purely electrostatic ion optics, its extremely low pressure and low temperature, the CSR allows for the storage of large molecular ions in their lowest quantum states”, summarizes Robert von Hahn, who led the technological development of the CSR.

The physicists at MPIK now have access to a unique instrument for fundamental experiments with molecular ions and clusters. The MPIK is grateful to the Max Planck Society for providing the financial support for the development and realization of the CSR project. Furthermore, the Weizmann Institute of Science in Rehovot (Israel) also contributed to the realization of the CSR and future experiments will be carried out in collaboration with (amongst others) the Universities of Heidelberg, Giessen, Greifswald, and Kaiserslautern; Columbia University (New York City, USA) and the Université catholique de Louvain (Louvain-la-Neuve, Belgium).