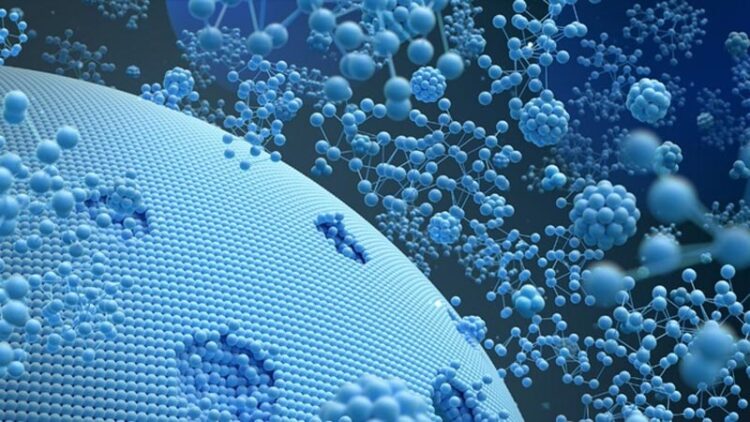 Particle transport on the droplet surface suspended in a supercritical fluid is not achieved by individual atomic units, but by clusters of nanometer-sized particles.
Credit: POSTECH

A long-lasting non-equilibrium phase coexistence in supercritical fluids has been observed by a Korean research team.

A team of researchers led by Professor Gunsu S. Yun from POSTECH’s Department of Physics and the Division of Advanced Nuclear Engineering and Professor Dong Eon Kim of the Department of Physics and Max Planck POSTECH/Korea Research Initiative (MPK) has observed the non-equilibrium phase coexistence in supercritical fluids lasting several hours. The researchers explained the phenomenon through a mass transport model at the phase coexistence interface, where the transport occurs in chunk of nano-sized clusters instead of single atoms.

It has been accepted as scientific knowledge for about 200 years that when the temperature and pressure of a fluid rise above a certain level called the critical point, the boundary between liquid and gas disappears and a change of state no longer occurs. However, in the 2010s, research findings reported that supercritical fluids may have liquid or gas properties depending on temperature and pressure conditions. Since then, it has been continuously confirmed through various experiments and simulations that multiple states exist in the supercritical fluid region. However, the possibility of a state in which a plurality of phases coexists rather than a single phase at the same temperature and pressure point – that is, a state similar to that in which a general liquid and gas coexist after phase separation – has not been discussed.

To this, the joint research team, in the process of making a supercritical argon fluid using a high-pressure chamber that operates in successive compression-expansion cycles, demonstrated a state where a large amount of argon droplets (formed by adiabatic expansion cooling) coexist with the gas-like supercritical background while maintaining their liquid-like properties. The state where these two phases coexist in isolation persists a surprisingly long time and the researchers presented a new mass transport model mediated by nano-clusters – an improvement on the conventional evaporation model – to explain the phenomenon.

In addition, this achievement is of significant academic value in that it laid the foundation for related research by identifying for the first time the nonequilibrium phase coexistence of supercritical fluids, which is an unexplored area.

The findings from this study were published on July 30, 2021 in Nature Communications. The research was conducted with the support from the National Research Foundation of Korea and the Max Planck Korea/POSTECH Research Initiative.