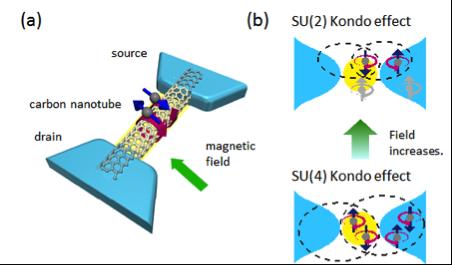 (a) Spin and orbital degrees of freedom of electron in a carbon nanotube quantum dot is shown by the straight blue arrows and circle purple arrows, respectively. We can control the number of electrons in the quantum dot one by one by the nearby gate electrode (not shown in the figure). (b) Because of the spin and orbital degrees of freedom, an SU(4) Kondo state is formed at zero magnetic field as shown in the bottom panel. At high magnetic field it evolves continuously to an SU(2) Kondo effect (top panel). Credit: Osaka University

Many fascinating phenomena with promising technological applications in areas such as superconductivity are linked to quantum phase transitions, but the role of quantum fluctuations in such transitions remains unclear.

While there have been many advances in understanding the behavior of individual particles such as protons, neutrons, and photons, the challenge of understanding systems containing many particles that strongly interact with one another has yet to be solved.

“We used a magnetic field to tune the Kondo state in a carbon nanotube, ensuring that the quantum fluctuations were the only variable in the system,” study coauthor Kensuke Kobayashi says. “By directly monitoring the conductance and shot noise of the carbon nanotube, we were able to demonstrate a continuous crossover between Kondo states with different symmetries.”