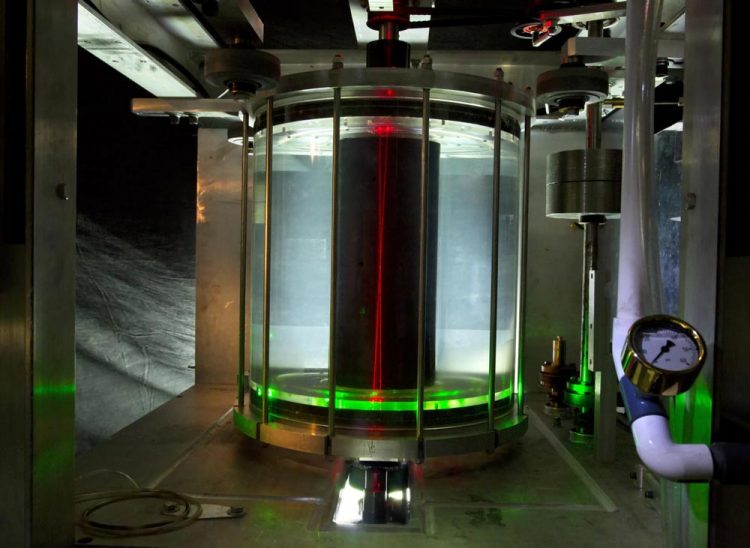 This is a water-filled version of MRI experiment showing transparent outer cylinder and blackened inner cylinder. Red lasers enter at bottom to measure the local speed of the water. Credit: Eric Edlund and Elle Starkman

The theory holds that MRI allows accretion disks, clouds of dust, gas, and plasma that swirl around growing stars and planets as well as black holes, to collapse into them.

According to the theory, this collapse happens because turbulent swirling plasma, technically known as “Keplerian flows,” gradually grows unstable within a disk.

The instability causes angular momentum — the process that keeps orbiting planets from being drawn into the sun — to decrease in inner sections of the disk, which then fall into celestial bodies.

Unlike orbiting planets, the matter in dense and crowded accretion disks may experience forces such as friction that cause the disks to lose angular momentum and be drawn into the objects they swirl around.

However, such forces cannot fully explain how quickly matter must fall into larger objects for planets and stars to form on a reasonable timescale.

At PPPL, physicists have simulated the hypothesized broader process in the laboratory's MRI experiment. The unique device consists of two concentric cylinders that rotate at different speeds.

In this experiment, researchers filled the cylinders with water and attached a water-filled plastic ball tethered by a spring to a post in the center of the device; the stretching and bending spring mimicked the magnetic forces in the plasma in accretion disks. Researchers then rotated the cylinders and videoed the behavior of the ball as seen from the top down.

The findings, reported in Communications Physics, compared the motions of the spring-tethered ball when rotating at different speeds. “With no stretching, nothing happens to the angular momentum,” said Hantao Ji, a professor of astrophysical sciences at Princeton University and principal researcher on the MRI and a coauthor of the paper. “Nothing also happens if the spring is too strong.”

However, direct measurement of the results found that when the spring-tethering was weak — analogous to the condition of the magnetic fields in accretion disks –behavior of the angular momentum of the ball was consistent with MRI predictions of developments in a real accretion disk.

The findings showed that the weakly tethered rotating ball gained angular momentum and shifted outward during the experiment. Since the angular momentum of a rotating body must be conserved, any gains in momentum must be matched by a loss of momentum in the inner section, allowing gravity to draw the disk into the object it has been orbiting.

Contributing to research for this paper was lead author Derek Hung, a former Princeton graduate student, together with physicists Erik Gilson and Kyle Caspary of PPPL and astrophysicist Eric Blackman of the Laboratory for Laser Energetics at the University of Rochester, who brought up the idea. Support for this work comes from NASA, the National Science Foundation, the DOE Office of Science, the Simons Foundation, the Institute for Advanced Study, and the Kavli Institute for Theoretical Physics.

PPPL, on Princeton University's Forrestal Campus in Plainsboro, N.J., is devoted to creating new knowledge about the physics of plasmas — ultra-hot, charged gases — and to developing practical solutions for the creation of fusion energy. The Laboratory is managed by the University for the U.S. Department of Energy's Office of Science, which is the largest single supporter of basic research in the physical sciences in the United States, and is working to address some of the most pressing challenges of our time. For more information, please visit science.energy.gov (link is external).