Non-volatile control of magnetic anisotropy through change of electric polarization 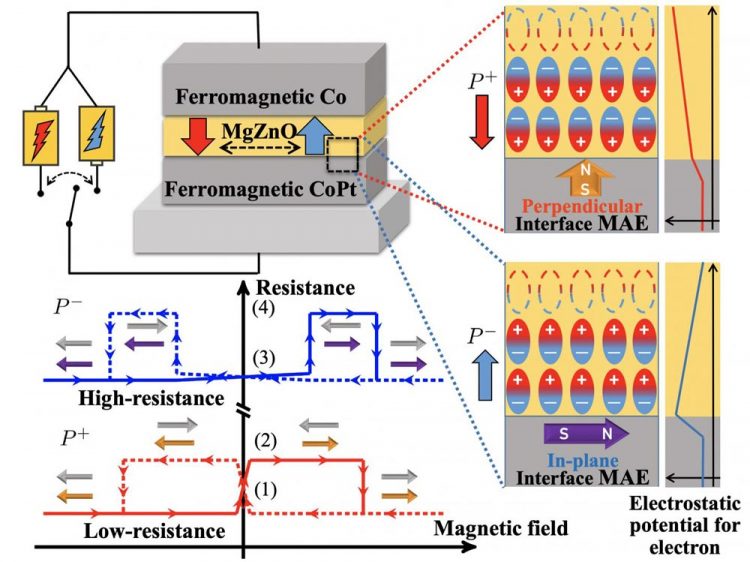 The ability to control the magnetic properties of a material using electricity is important for the development of computer technology, particularly nonvolatile memory, which is memory that requires no constant electrical supply to maintain a set state.

That is, electrical control of the magnetic states of a material may allow us to realize the attractive energy-efficient concept of nonvolatile magnetic memory that is switched between different states using electricity.

Recently, Japanese researchers from Kanazawa University found that the magnetic properties of one metal layer could be controlled by applying electricity to an overlying metal oxide layer.

The research team investigated the change in the magnetic properties of a layer of cobalt-platinum alloy (CoPt) induced by the electrical polarization of an overlying zinc oxide (ZnO) layer.

To confirm the promising results obtained from their simulations, the researchers fabricated a stacked structure called a tunnel junction containing Mg doped ZnO and CoPt layers. The magnetic properties and switching behavior of the tunnel junction were investigated.

The results revealed that the tunnel junction showed substantially different magnetic behavior depending on the electrical polarization state of the ZnO layer, providing qualitative agreement between the simulation results and theoretical findings.

“The ZnO/CoPt system demonstrates that it is possible to achieve nonvolatile electrical control of the magnetic properties of materials,” explains co-author Tatsuki Oda. “Such a concept is important for the development of advanced energy-efficient nonvolatile magnetic memory.”

The nonvolatile control of the magnetic behavior of CoPt by the electrical polarization of ZnO represents an attractive concept to realize new nonvolatile memory applications to further advance information processing.