Home / Physics and Astronomy / New type of low-energy nanolaser that shines in all directions
18.12.2018

New type of low-energy nanolaser that shines in all directions 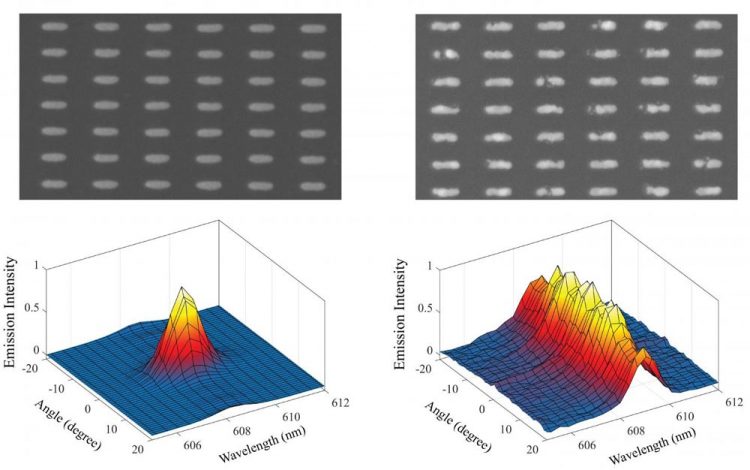 The left panel correspond to a 'good' nanolaser, while the right panel to a disordered nanolaser. The upper images are photographs of the nanolasers made with an electron microscope. The light grey areas correspond to silver nanoparticles acting as the nano-mirrors of the laser. The lower panels correspond to the light emission from the nanolasers as a function of the emitted angle and wavelength (color of the emission). For the good laser (bottom left), the light is emitted in one direction and has one color. For the disordered nanolaser, the emission has also one color, but it is now omnidirectional. Credit: Eindhoven University of Technology

Lack of control of the variables determining the response of a system is usually seen as a curse in science and technology. But what about a slight pinch of imperfection and disorder?

Imperfections and irregularities are unavoidable in nanoscience due to our limited level of control of nanofabrication processes. Disorder is potentially detrimental to nanosystems, but if well-contained, disorder might not be an intruder after all, leading to novel physical concepts and applications.

Published in the prestigious journal Physical Review Letters, scientists from Eindhoven University of Technology (TU/e) and the Dutch Institute for Fundamental Energy Research (DIFFER) have investigated the role of imperfections and disorder in nanolasers.

By introducing a slight degree of disorder, they have observed a dramatic change: the laser no longer emits in one specific direction, but in all directions.

Development of nanoscale lasers (smaller than the thickness of a human hair) is a very active field of research. In a normal laser, each photon (light particle) is 'cloned' many times in a medium that is located inside a cavity (e.g. a pair of mirrors between which the photon moves back and forth producing other photons with the same characteristics).

This process is known as Light Amplification by Stimulated Emission of Radiation (LASER). To achieve laser emission an electrical current is usually injected through the medium, or it is illuminated with high energy light. The minimum energy needed for a laser to emit is called the lasing threshold.

A different kind of laser is the so-called polariton laser. This works on the principle not of cloning photons but making non-identical photons identical in much the same way as water vapor molecules, moving in all directions with different velocities, are condensed into a single drop.

Condensation of photons gives rise to the intense and directional emission characteristic of a laser. An important advantage of polariton lasers is that they have a much lower lasing threshold, which makes them excellent candidates for many applications.

However, a major problem of polariton lasers has been that they need to operate at very low temperatures (like vapor condensation that takes place only when the temperature is lowered) but by using organic materials, it is possible to obtain polariton laser emission even at ambient temperature.

The Eindhoven researchers demonstrated last year that they can realize nanoscale polariton lasers that function at ambient temperature, using metallic nanoparticles instead of mirrors as in normal lasers.

The TU/e-DIFFER researchers have now discovered a new kind of polariton laser that consists of a regular pattern of silver nanostripes covered with colored PMMA-polymer whose dye comprises organic emitting molecules. However, the silver stripes deliberately have some degree of imperfection and disorder. The emission from this non-perfect nanolaser is omnidirectional and mainly is determined by the properties of the organic molecules.

The researchers think their laser may eventually be applied in many areas. Compared to a LED, the omnidirectional laser light is much brighter and better defined. That's why it is a good candidate for microscopy lighting, which currently uses LEDs. LIDAR (Laser Imaging Detection And Ranging) is another potential application. Current LIDAR use one or more lasers and a set of fast moving mirrors in order to cover large areas to image distant objects.

An omnidirectional laser does not require the moving mirrors, thereby significantly reducing the complexity. And also general illumination is an option, says lead researcher professor Jaime Gomez Rivas. “But the research is still very fundamental. We hope that our results will stimulate other researchers to improve them by further reducing the lasing threshold or increasing the range of emitted colors.”

The research group responsible for this work investigates light-matter interaction enhanced by resonant structures, such as metallic nanoparticles and structured surfaces. Strong light-matter coupling leads to new fundamental phenomena that can be exploited to tailor material properties. The group is part of the Photonics and Semiconductor Nanophysics capacity group at the department of Applied Physics and of the “Institute for Integrated Photonics” of Eindhoven University of Technology (TU/e), and formerly part of the Dutch Institute for Fundamental Energy Research (DIFFER), where the experimental work in this paper was performed.