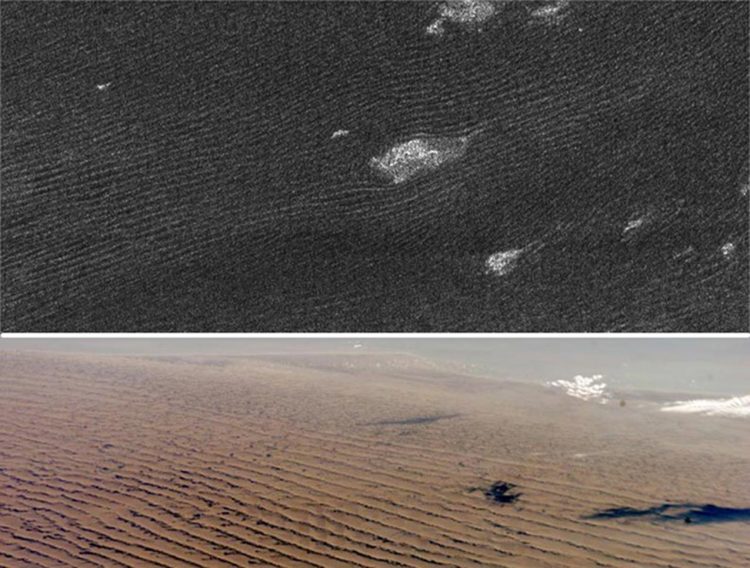 Thanks to imagery from NASA’s Cassini spacecraft, we also know that Titan has rivers and lakes made of ethane and methane, as well as windswept sand dunes that are dozens of yards high, more than a mile wide and hundreds of miles long. What scientists have not known is how they were created, because current data suggested that Titan’s winds were not strong enough to form the dunes spotted by Cassini.

A team of researchers has now shown that winds on Titan must blow 50 percent faster than previously thought in order to move that sand. This discovery may explain how the dunes were formed and could inform observations made on other planetary bodies. The findings are published in the current edition of the journal Nature.

Scientists were amazed by the first radar images of Titan returned by the Cassini spacecraft a decade ago. The images showed never-before-seen dunes created by particles not previously known to have existed.

“It was surprising that Titan had particles the size of grains of sand—we still don’t understand their source—and that it had winds strong enough to move them,” said Devon Burr, an associate professor in the Earth and Planetary Sciences Department at the University of Tennessee, Knoxville, and lead author of the paper. “Before seeing the images, we thought that the winds were likely too light to accomplish this movement.”

The biggest mystery, however, was the shape of the dunes. The Cassini data showed that the predominant winds that shaped the dunes blew from east to west. However, the streamlined appearance of the dunes around features like mountains and craters indicated they were created by winds moving in exactly the opposite direction.

“Until now, there’s been a big mystery as to why most winds on Titan blow from the east, yet the dunes appear to form from westerly winds,” said Nathan Bridges, planetary scientist at the Johns Hopkins University Applied Physics Laboratory in Laurel, Maryland and a co-author of the paper.

To solve that mystery, Burr and her team dedicated six years to refurbishing and modifying a defunct NASA high-pressure wind tunnel to recreate Titan's surface conditions. To reproduce the Titan environment at Earth temperatures (much higher than Titan’s), they pressurized the wind tunnel to 12.5 atmospheres (equivalent to being about 385 feet underwater) that correctly simulated wind physics at Titan’s pressure of 1.4 bars (similar to 13 feet underwater) [CORRECTED DEC 9 2014 APL].

To account for the very low gravity and density of sand on Titan, and given the uncertainties in the actual materials on the moon, they used 24 different substances, including very low weight particles such as hollow glass spheres and walnut shells. Two years were spent running the experiments, modeling the results, and calibrating the models to match the observations. These adjustments were made to find the best simulation of Titan’s dense atmosphere.

“Our models started with previous wind speed models, but we had to keep tweaking them to match the wind tunnel data,” said Burr. “We discovered that movement of sand on Titan's surface needed a wind speed that was higher than what previous models suggested.”

When the researchers zeroed in on the most accurate model, they discovered that the minimum wind speed on Titan has to be about 50 percent faster than previously thought to move the moon’s sands.

The discovery of the higher threshold wind offers an explanation for the shape of the dunes, too. “If the predominant winds are light and blow east to west, then they are not strong enough to move sand,” said Burr. “But a rare event may cause the winds to reverse momentarily and strengthen.”

According to atmospheric models, the wind reverses twice during a Saturn year (which is equal to about 30 Earth years). This reversal happens when the sun crosses over the equator, causing the atmosphere—and subsequently the winds—to shift. Burr theorizes that it is only during this brief time of fast winds blowing from the west that the dunes are shaped. “The high wind speed might have gone undetected by Cassini because it happens so infrequently,” she said. The team’s finding also validates the use of older models for bodies with thin atmospheres, like comets and asteroids.

Bridges emphasizes that “were it not for these experiments, we never would have determined that the wind speeds necessary to move sand on Titan predicted by previously published models were too low. Our results, reconciled with the recalibrated models, explain why dunes on Titan can only move under rare gusts from westerly winds.”

This research was supported by grants from NASA's Planetary Geology and Geophysics Program and the Outer Planets Research Program. A new grant will now allow the team to examine Titan's winds during different climates on Titan, as well as the effect of electrostatic forces on the sand movement.