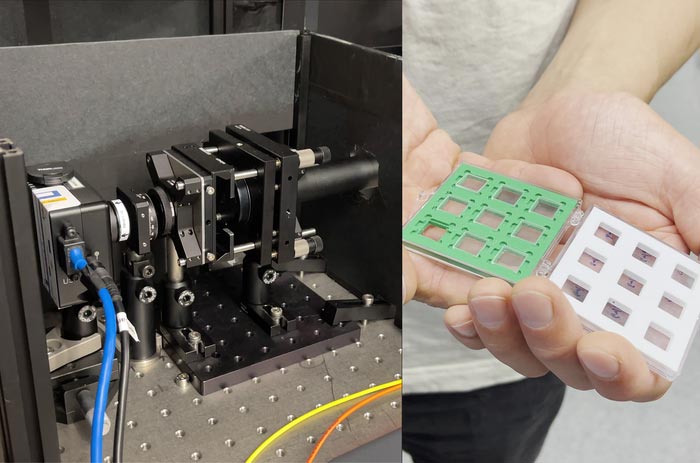 Left image: que quantum enhanced microscope mounted in the lab at ICFO. Right image: samples of protein A, a standard diagnostic solution used as a calibration tool. The proteins are mounted onto a glass slide, equally spaced out and then inserted in the microscope. ©ICFO

As a kid, were you ever curious to know what lice looked like from really close by? Or even a mosquito? To do this you would definitely need to use a microscope, in order to observe all the complex structures of these insects.

Invented more than 350 years ago and considered a ground breaking discovery, this instrument is now omnipresent in many fields of science. Chemists, biologists, clinicians, physicists, and even engineers rely on the capabilities of different types of microscopes to unveil the inner structures of organisms and matter that we cannot see with our naked eye. Most microscopes use light as the tool to illuminate transparent or semi-transparent samples, and allow us to see what is happening inside.  Some samples tolerate high intensity levels of light, but others, like some molecules and cells, are extremely delicate and become damaged or even die under such intense radiation. This is not good for experimental accuracy.

To avoid hurting the samples, the best option would be to reduce the intensity of light. But in doing so, the image becomes noisy and unsharp, which can obscure critical details in the image that provide important sample information to the observer. In trying to overcome this major barrier in microscopy, many studies have been searching for techniques that allow the imaging of very small, very sensitive samples, without actually modifying or damaging them in the process. One promising option nowadays is to use quantum light. But what is this exactly and why would quantum-enhanced microscopy favours the observation and imaging of transparent cells?

Since 2018, the European project Q-mic has been working to develop quantum imaging for microscopy of very sensitive samples. The results of their work have now been gathered in a recent paper published in Science Advances. The team of researchers, which include ICFO researchers Robin Camphausen, Alvaro Cuevas, Luc Duempelmann, Roland Terborg, Ewelina Wajs, led by ICREA Prof. at ICFO Valerio Pruneri, in collaboration with the project partners Simone Tisa and Alessandro Ruggeri from Micro Photon Devices (MPD), Iris Cusini, from Politecnico di Milano and Fabian Steinlechner, from Fraunhofer IOF, have reported on the results obtained from the new quantum-enhanced microscope that the whole consortium has developed. They report on the capabilities of this device in using very low intensity levels of light to image large areas of samples, with a higher sensitivity and resolution, compared to classical microscopes.

As Robin Camphausen explains, “the Q-MIC microscope is unique in the sense that it has been designed to actually illuminate the sample using a special type of light, a “quantum light”. Instead of normal light, where many unordered photons reach the sample, the quantum source developed by the team uses pairs of entangled photons and sends them in small numbers to hit the sample and retrieve information in a more detailed and specific way.“

Generally, using low levels of light to avoid damage unfortunately increases the amount of background noise in the measurement and hampers all details and sharpness you can get in the image. “It´s just like when the first mobile phones were launched into market. If you tried taking a picture at night with your friends, the sharpness of the picture was really bad because not enough photons would be captured to form a clear image so the pixels would look undefined, and also the background lights disturbed the quality of the image” clarifies Camphausen.

This issue is bypassed with this microscope, because it uses interference patterns of entangled photons to actually reconstruct the image of the sample. Specifically, it integrates a quantum source, that generates space-polarization hyper-entangled N00N state photons, a large field of view lens free interference microscope and a single photon avalanche diode (SPAD) array camera. “The device we built and the technique we developed actually uses the entanglement of photons to enhance the interference patterns obtained in the imaging process, and because of this quantum effect, we are able to reduce the noise level and increase the sensitivity of the measurements by more than 25% when compared to classical measurements” comments Alvaro Cuevas, co-author of the paper.

In doing so, what the camera registers are not optical intensities nor single photon counts, but actually two-photon coincidences across the entire field of view. When the pairs of photons go through the device, a set of Savart plates[1] divides them into two paths, and guides them to the sample. If the sample is flat, the path of the photons will be the same, but if the sample has different thicknesses, the individual paths of the photons change and an interference pattern is created on the detector. By repeating this process of sending in photons, the researchers obtain an interference pattern image without the need of a pixel-to-pixel scanning system. And with the help of mathematical algorithms, they can reconstruct the image to find more details in the sample itself.

To confirm such improvement in the results, the researchers took a standard diagnostic solution made of a sample of Protein A, used as a calibration tool. The proteins were deposited onto a glass slide, equally spaced out, and then the sample was mounted on a sample holder inside the microscope. Firstly, the sample was initially illuminated with classical light and then with quantum light; secondly, the respective interference patterns were obtained, and, finally, the images reconstructed. What they saw is that the quantum technique retrieves a much smoother image when compared to the classical one.

Even though the quantum image was reconstructed using fewer photons than the classical one, the smoothness of the image was much cleaner. Cuevas summarizes this as follows, “when we refer to smoothness, it means that if you take an image of a flat surface with low intensity classical light, the level of noise seen in the image is due to the randomness in the level of the data, basically the noise that comes from all the discrete disordered photons that constitute this type of light. With quantum light, the noise level and thus the randomness is reduced, so you get better information about sharp edges, which, in the end, is essential for recognizing concentrations, depths, heights of the samples”.

The results are very promising and enable a completely new way of implementing quantum imaging in everyday sensing and imaging technology. As Valerio Pruneri, coordinator of the project, finally emphasizes, “this innovative device has the potential to become an everyday tool used at large… it shows amazing capabilities that can definitely be exploited in several applications, ranging from material sciences, analysing transparent surfaces for quality assurance in flexible electronics, to quantum cryptography for secure communications or ultra-sensitive imaging of micro-organisms, viruses, and molecules, just to mention a few.” Who knows. Quantum-enhanced microscopy could become a game-changer in the world of microscopy.

Q-MIC has received funding from the European Union’s Horizon 2020 research and innovation programme under grant agreement No 801060. It aims to develop a new on-chip differential interference contrast microscope based on an unconventional birefringence lens-free configuration, with the latest quantum sources and single-photon image sensors. The Q-MIC platform is introducing a new type of interferometric microscopy without lenses and illuminated by quantum light, which will allow detection of ultrathin transparent materials, such as photosensitive cells and biological tissues, over large areas (several mm2), with unprecedented sensitivities (≈1 Å) and low powers (in the range of fW).

This three-year project is being coordinated by ICFO, in collaboration with the Institute of Quantum Optics and Quantum Information (OEAW), Politecnico di Milano (Polimi), University of Glasgow and Fraunhofer Institute for Applied Optics and Precision Engineering (IOF) together with the companies Carl Zeiss and Micro Photon Devices (MPD).