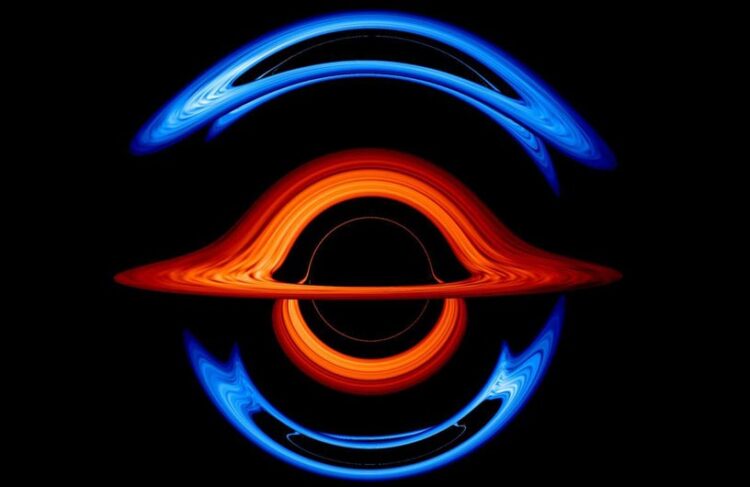 In this frame from the new visualization, a supermassive black hole weighing 200 million solar masses lies in the foreground. Its gravity distorts light from the accretion disk of a smaller companion black hole almost directly behind it, creating this surreal view. Different colors for the accretion disks make it easier to track the contributions of each one.
Credit: NASA's Goddard Space Flight Center/Jeremy Schnittman and Brian P. Powell

A pair of orbiting black holes millions of times the Sun’s mass perform a hypnotic pas de deux in a new NASA visualization. The movie traces how the black holes distort and redirect light emanating from the maelstrom of hot gas – called an accretion disk – that surrounds each one.

Viewed from near the orbital plane, each accretion disk takes on a characteristic double-humped look. But as one passes in front of the other, the gravity of the foreground black hole transforms its partner into a rapidly changing sequence of arcs. These distortions play out as light from both disks navigates the tangled fabric of space and time near the black holes.

“We’re seeing two supermassive black holes, a larger one with 200 million solar masses and a smaller companion weighing half as much,” said Jeremy Schnittman, an astrophysicist at NASA’s Goddard Space Flight Center in Greenbelt, Maryland, who created the visualization. “These are the kinds of black hole binary systems where we think both members could maintain accretion disks lasting millions of years.”

The accretion disks have different colors, red and blue, to make it easier to track the light sources, but the choice also reflects reality. Hotter gas gives off light closer to the blue end of the spectrum, and material orbiting smaller black holes experiences stronger gravitational effects that produce higher temperatures. For these masses, both accretion disks would actually emit most of their light in the UV, with the blue disk reaching a slightly higher temperature.

Visualizations like this help scientists picture the fascinating consequences of extreme gravity’s funhouse mirror. The new video doubles down on an earlier one Schnittman produced showing a solitary black hole from various angles.

Seen nearly edgewise, the accretion disks look noticeably brighter on one side. Gravitational distortion alters the paths of light coming from different parts of the disks, producing the warped image. The rapid motion of gas near the black hole modifies the disk’s luminosity through a phenomenon called Doppler boosting – an effect of Einstein’s relativity theory that brightens the side rotating toward the viewer and dims the side spinning away.

The visualization also shows a more subtle phenomenon called relativistic aberration. The black holes appear smaller as they approach the viewer and larger when moving away.

These effects disappear when viewing the system from above, but new features emerge. Both black holes produce small images of their partners that circle around them each orbit. Looking closer, it’s clear that these images are actually edge-on views. To produce them, light from the black holes must be redirected by 90 degrees, which means we’re observing the black holes from two different perspectives – face on and edge on – at the same time.

“A striking aspect of this new visualization is the self-similar nature of the images produced by gravitational lensing,” Schnittman explained. “Zooming into each black hole reveals multiple, increasingly distorted images of its partner.”

Schnittman created the visualization by computing the path taken by light rays from the accretion disks as they made their way through the warped space-time around the black holes. On a modern desktop computer, the calculations needed to make the movie frames would have taken about a decade. So Schnittman teamed up with Goddard data scientist Brian P. Powell to use the Discover supercomputer at the NASA Center for Climate Simulation. Using just 2% of Discover’s 129,000 processors, these computations took about a day.

Astronomers expect that, in the not-too-distant future, they’ll be able to detect gravitational waves – ripples in space-time – produced when two supermassive black holes in a system much like the one Schnittman depicted spiral together and merge.

Banner: In this frame from the new visualization, a supermassive black hole weighing 200 million solar masses lies in the foreground. Its gravity distorts light from the accretion disk of a smaller companion black hole almost directly behind it, creating this surreal view. Different colors for the accretion disks make it easier to track the contributions of each one. Credit: NASA’s Goddard Space Flight Center/Jeremy Schnittman and Brian P. Powell