Home / Physics and Astronomy / New models give insight into the heart of the Rosette Nebula
13.02.2018

New models give insight into the heart of the Rosette Nebula 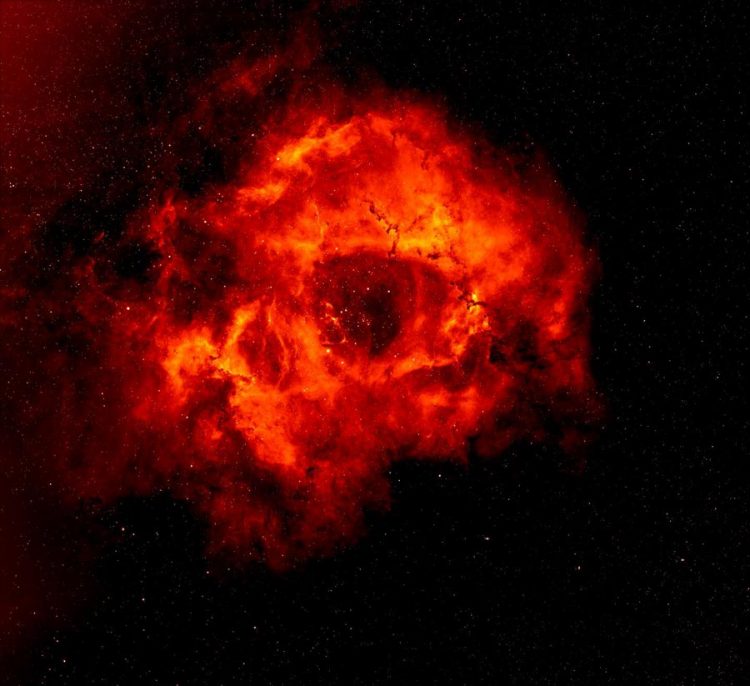 The Rosette Nebula is located in the Milky Way Galaxy roughly 5,000 light-years from Earth and is known for its rose-like shape and distinctive hole at its centre. The nebula is an interstellar cloud of dust, hydrogen, helium and other ionized gases with several massive stars found in a cluster at its heart.

Stellar winds and ionising radiation from these massive stars affect the shape of the giant molecular cloud. But the size and age of the cavity observed in the centre of Rosette Nebula is too small when compared to the age of its central stars.

Through computer simulations, astronomers at Leeds and at Keele University have found the formation of the Nebula is likely to be in a thin sheet-like molecular cloud rather than in a spherical or thick disc-like shape, as some photographs may suggest. A thin disc-like structure of the cloud focusing the stellar winds away from the cloud's centre would account for the comparatively small size of the central cavity.

Study lead author, Dr Christopher Wareing, from the School of Physics and Astronomy said: “The massive stars that make up the Rosette Nebula's central cluster are a few millions of years old and halfway through their lifecycle. For the length of time their stellar winds would have been flowing, you would expect a central cavity up to ten times bigger.

“We simulated the stellar wind feedback and formation of the nebula in various molecular cloud models including a clumpy sphere, a thick filamentary disc and a thin disc, all created from the same low density initial atomic cloud.

“It was the thin disc that reproduced the physical appearance – cavity size, shape and magnetic field alignment — of the Nebula, at an age compatible with the central stars and their wind strengths.

“To have a model that so accurately reproduces the physical appearance in line with the observational data, without setting out to do this, is rather extraordinary.

“We were also fortunate to be able to apply data to our models from the ongoing Gaia survey, as a number of the bright stars in the Rosette Nebula are part of the survey.

Applying this data to our models gave us new understanding of the roles individual stars play in the Rosette Nebula. Next we'll look at the many other similar objects in our Galaxy and see if we can figure out their shape as well.”

The simulations, published today in the Monthly Notices of the Royal Astronomical Society, were run using the Advanced Research Computing centre at Leeds. The nine simulations required roughly half a million CPU hours — the equivalent to 57 years on a standard desktop computer.

Martin Callaghan, a member of the Advanced Research Computing team, said: “The fact that the Rosette Nebula simulations would have taken more than five decades to complete on a standard desktop computer is one of the key reasons we provide powerful supercomputing research tools. These tools enabled the simulations of the Rosette Nebula to be done in a matter of a few weeks.”

Rosette Nebula image is based on data obtained as part of the INT Photometric H-Alpha Survey of the Northern Galactic Plane, prepared by Nick Wright, Keele University, on behalf of the IPHAS Collaboration. http://www.astro.keele.ac.uk/~njw/imaging.html

The research paper, A new mechanical stellar wind feedback model for the Rosette Nebula is published in the Monthly Notices of the Royal Astronomical Society 13 February 2018 (DOI: 10.1093/mnras/sty148)

For additional information and to request interviews please contact Anna Harrison, Press Officer at the University of Leeds, on +44 (0)113 34 34196 or a.harrison@leeds.ac.uk

1The University of Leeds is one of the largest higher education institutions in the UK, with more than 33,000 students from more than 150 different countries, and a member of the Russell Group of research-intensive universities.

We are a top ten university for research and impact power in the UK, according to the 2014 Research Excellence Framework, and are in the top 100 for academic reputation in the QS World University Rankings 2018. Additionally, the University was awarded a Gold rating by the Government's Teaching Excellence Framework in 2017, recognising its 'consistently outstanding' teaching and learning provision. Twenty-six of our academics have been awarded National Teaching Fellowships – more than any other institution in England, Northern Ireland and Wales – reflecting the excellence of our teaching. http://www.leeds.ac.uk

* Keele was recently awarded Gold in the Teaching Excellence Framework

* Keele is ranked No.1 in England for Course Satisfaction (Guardian University Guide 2018)

* 97% of the University's research was deemed to be world-leading, or of international importance, in the latest Research Excellence Framework