New insights into the structure of the neutron 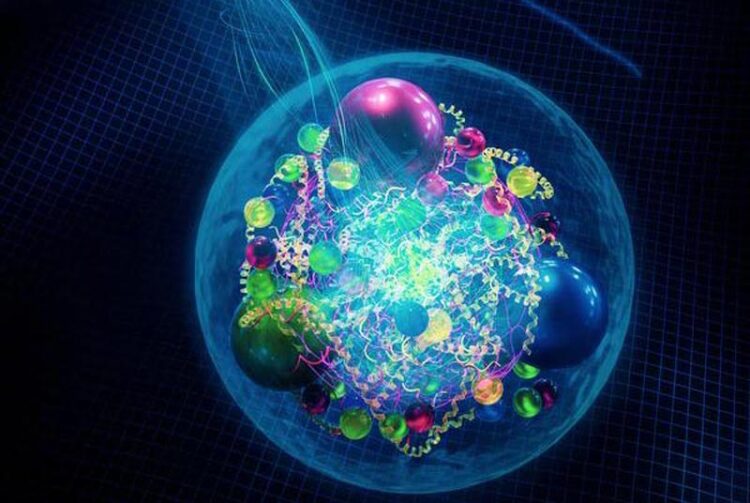 Artistic view of the neutron and its internal structure
©: Professor Dr. Xiaorong Zhu, University for Science and Technology, China

All known atomic nuclei and therefore almost all visible matter consists of protons and neutrons, yet many of the properties of these omnipresent natural building blocks remain unknown. As an uncharged particle, the neutron in particular resists many types of measurement and 90 years after its discovery there are still many unanswered questions regarding its size and lifetime, among other things. The neutron consists of three quarks which whirl around inside it, held together by gluons. Physicists use electromagnetic form factors to describe this dynamic inner structure of the neutron. These form factors represent an average distribution of electric charge and magnetization within the neutron and can be determined by means of experimentation.

“A single form factor, measured at a certain energy level, does not say much at first,” explained Professor Frank Maas, a researcher at the PRISMA+ Cluster of Excellence in Mainz, the Helmholtz Institute Mainz (HIM), and GSI Helmholtzzentrum für Schwerionenforschung Darmstadt. “Measurements of the form factors at various energies are needed in order to draw conclusions on the structure of the neutron.” In certain energy ranges, which are accessible using standard electron-proton scattering experiments, form factors can be determined fairly accurately. However, so far this has not been the case with other ranges for which so-called annihilation techniques are needed that involve matter and antimatter mutually destroying each other.

In the BESIII Experiment being undertaken in China, it has recently proved possible to precisely determine the corresponding data in the energy range of 2 to 3.8 gigaelectronvolts. As pointed out in an article published by the partnership in the current issue of “Nature Physics”, this is over 60 times more accurate compared to previous measurements. “With this new data, we have, so to speak, filled a blank space on the neutron form factor ‘map’, which until now was unknown territory,” Professor Frank Maas pointed out. “This data is now as precise as that obtained in corresponding scattering experiments. As a result, our knowledge of the form factors of the neutron will change dramatically and as such we will get a far more comprehensive picture of this important building block of nature.”

Truly pioneering work in a difficult field of research

To make inroads into completing the required fields of the form factor ‘map’, the physicists needed antiparticles. The international partnership therefore used the Beijing Electron-Positron Collider II for its measurements. Here, electrons and their positive antiparticles, i.e., positrons, are allowed to collide in an accelerator and destroy each other, creating other new particle pairs – a process known as ‘annihilation’ in physics. Using the BESIII detector, the researchers observed and analyzed the outcome, in which the electrons and positrons form neutrons and anti-neutrons. “Annihilation experiments like these are nowhere near as well-established as the standard scattering experiments,” added Maas. “Substantial development work was needed to carry out the current experiment – the intensity of the accelerator had to be improved and the detection method for the elusive neutron had to be practically reinvented in the analysis of the experimental data. This was by no means straightforward. Our partnership has done truly pioneering work here.”

As if this was not enough, the measurements showed the physicists that the results for the form factor do not produce a consistent slope relative to the energy level, but rather an oscillating pattern in which fluctuations become smaller as the energy level increases. They observed similar surprising behavior in the case of the proton – here, however, the fluctuations were mirrored, i.e., phase-shifted. “This new finding indicates first and foremost that nucleons do not have a simple structure,” Professor Frank Maas explained. “Now our colleagues on the theoretical side have been asked to develop models to account for this extraordinary behavior.”

Finally, on the basis of their measurements, the BESIII partnership has modified how the relative ratio of the neutron to proton form factors needs to be viewed. Many years ago, the result produced in the FENICE experiment was a ratio greater than one, which means that the neutron must have a consistently larger form factor than the proton. “But as the proton is charged, you would expect it to be completely the other way round,” Maas asserted. “And that’s just what we see when we compare our neutron data with the proton data we’ve recently acquired through BESIII. So here we’ve rectified how we need to perceive the very smallest particles.”

From the micro- to the macrocosm

According to Maas, the new findings are especially important because they are so fundamental. “They provide new perspectives on the basic properties of the neutron. What’s more, by looking at the smallest building blocks of matter we can also understand phenomena that occur in the largest dimensions – such as the fusion of two neutron stars. This physics of extremes is already very fascinating.”