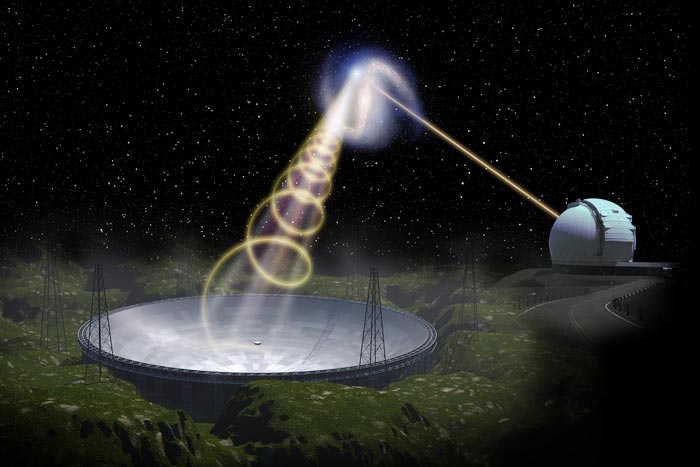 Fast radio bursts (FRBs) are millisecond-long cosmic explosions that each produce the energy equivalent to the sun’s annual output. More than 15 years after the deep-space pulses of electromagnetic radio waves were first discovered, their perplexing nature continues to surprise scientists – and newly published research only deepens the mystery surrounding them.

In the Sept. 21 issue of the journal Nature, unexpected new observations from a series of cosmic fast radio bursts by an international team of scientists – including UNLV astrophysicist Bing Zhang – challenge the prevailing understanding of the physical nature and central engine of FRBs.

The cosmic FRB observations were made in late spring 2021 using the massive Five-hundred-meter Aperture Spherical radio Telescope (FAST) in China. The team, led by Heng Xu, Kejia Lee, Subo Dong from Peking University, and Weiwei Zhu from the National Astronomical Observatories of China, along with Zhang, detected 1,863 bursts in 82 hours over 54 days from an active fast radio burst source called FRB 20201124A.

“This is the largest sample of FRB data with polarization information from one single source”, said Lee.

Recent observations of a fast radio burst from our Milky Way galaxy suggest that it originated from a magnetar, which is a dense, city-sized neutron star with an incredibly powerful magnetic field. The origin of very distant cosmological fast radio bursts, on the other hand, remains unknown. And the latest observations leave scientists questioning what they thought they knew about them.

“These observations brought us back to the drawing board,” said Zhang, who also serves as founding director of UNLV’s Nevada Center for Astrophysics. “It is clear that FRBs are more mysterious than what we have imagined. More multi-wavelength observational campaigns are needed to further unveil the nature of these objects.”

What makes the latest observations surprising to scientists is the irregular, short-time variations of the so-called “Faraday rotation measure”, which is the strength of the magnetic field and density of particles in the vicinity of the FRB source. The variations went up and down during the first 36 days of observation and suddenly stopped during the last 18 days before the source quenched.

“I equate it to filming a movie of the surroundings of an FRB source, and our film revealed a complex, dynamically evolving, magnetized environment that was never imagined before,” said Zhang. “Such an environment is not straightforwardly expected for an isolated magnetar. Something else might be in the vicinity of the FRB engine, possibly a binary companion,” added Zhang.

To observe the host galaxy of the FRB, the team also made use of the 10-m Keck telescopes located at Mauna Kea in Hawaii. Zhang says that young magnetars are believed to reside in active star-forming regions of a star-forming galaxy, but the optical image of the host galaxy shows that – unexpectedly – the host galaxy is a metal-rich barred spiral galaxy like our Milky Way. The FRB location is in a region where there is no significant star-forming activity.

“This location is inconsistent with a young magnetar central engine formed during an extreme explosion such as a long gamma-ray burst or a superluminous supernova, widely speculated progenitors of active FRB engines,” said Dong.

The study, “A fast radio burst source at a complex magnetized site in a barred galaxy”, appeared September 21 in the journal Nature and includes 74 co-authors from 30 institutions. In addition to UNLV, Peking University, and the National Astronomical Observatories of China, collaborating institutions also include Purple Mountain Observatory, Yunnan University, UC Berkeley, Caltech, Princeton University, University of Hawaii, and other institutions from China, the USA, Australia, Germany, and Israel.