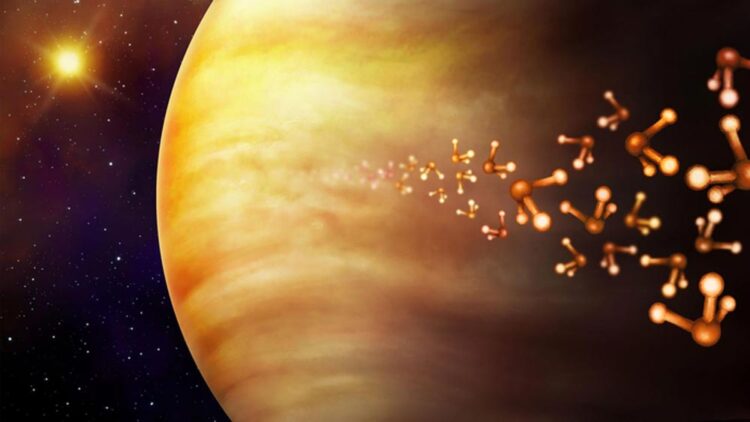 Illustration of the planet Venus and the phosphine molecule, made up of one phosphorus and three hydrogen atoms. Phosphine is considered a bioindicator, that is, a possible indicator of biological activity.
Credit: Danielle Futselaar

Even in our cosmic backyard, the Solar System, many questions remain open. On Venus there are formations similar to volcanoes, but it is not known if they are active. The surface of Mars suggests that there was once a vast ocean, but how it disappeared remains unclear. On the other hand, recent detections of chemical compounds that may indicate the presence of biological activity on Mars and Venus, the so-called biosignatures, keep the search for life outside Earth alive. The answers may lie in the analysis of the light that reaches us from these planets, through the “fingerprints” that the molecules leave in the spectrum of that light.

In the study now published in the Atmosphere scientific journal, researchers from the Instituto de Astrofísica e Ciências do Espaço (Faculty of Sciences of the University of Lisbon, Portugal) compared simulations obtained with the Planetary Spectrum Generator (PSG), a planetary spectrum simulator, with observations of infrared light from the planets Venus, Mars and Jupiter.

Using PSG, developed by NASA, the team was able to explain the results of some observations and conclude that this simulator is an effective tool for studying the abundances of chemical compounds present in small amounts in planetary atmospheres.

One of the chemical compounds analyzed, methane, may originate from both biological activity and geological processes. That’s why its elusive presence on Mars, with detection by the Mars Express spacecraft and the absence of detection by the ExoMars TGO spacecraft, remains a mystery.

“By varying the parameters of our simulations, we were able to explain this detection and non-detection of methane on Mars and understand the conditions and locations in which they can occur. This is an important step towards clarifying the association of methane on Mars with the possible existence of life”, explains Pedro Machado (IA & Ciências ULisboa), co-author of this study.

Another unknown on the red planet, also of great interest to the scientific field of the search for life outside Earth, astrobiology, is the fate of most of its water. Evidence suggests that this once flowed in abundance on the planet, and that much of the northern hemisphere was once a vast ocean. Today, Mars is an icy desert.

“Knowing the ratio between two variants of hydrogen, the deuterium isotope and simple hydrogen, helps us understand the temporal evolution of water on Mars. Deuterium is a heavy hydrogen atom, its nucleus contains one more neutron, so water, H2O, made up of a deuterium atom and a hydrogen atom, HDO, is heavier and will escape into space with more difficulty. Comparison of this ratio at a global and local level on Mars, possible with this study, gives us valuable information about the fate of Martian water”, explains João Dias (IA & Ciências ULisboa), lead author of this study.

Also included in this study, phosphine can be spontaneously produced in high pressure and temperature environments in the presence of phosphorus and hydrogen, the two chemical elements that constitute it. “This is what happens on Jupiter, with phosphine being one of those responsible for the colorful bands in the atmosphere of this gas giant”, explains Pedro Machado, “but on a rocky planet, like Earth, where these extreme conditions do not exist, its presence is associated with biological activity”.

So, when in 2020 a study identified phosphine in the clouds of Venus, the scientific community turned its attention to this planet. “Further studies carried out under other conditions showed that phosphine may not be present after all or be present in much smaller amounts than initially identified, something that we were also able to reproduce”, adds Pedro Machado.

Still on Venus, “sulfur dioxide is very important for us to know if there is volcanic activity. By precisely determining the abundance of this compound at different altitudes, as we have shown to be possible with PSG, we will be able to conclude about its origin”, adds João Dias.

“This work is of great importance for space missions that are now being developed, such as EnVision, Ariel, and Mars Express, from the European Space Agency (ESA), in which IA is involved, by telling us the expected values for these chemical components and allowing the instruments that are being designed for these missions to be optimized to detect within the range of expected values”, highlights Pedro Machado, who is a co-investigator of these missions.

“In particular, missions like Ariel, which will study the atmospheres of planets orbiting stars other than the Sun, exoplanets, benefit greatly from this type of Solar System studies, which can serve as a model for what we hope to be able to come to life. observe outside the Solar System”, adds João Dias.

“This demonstration of the effectiveness of PSG is very important for the scientific community, and the IA is at the forefront of these studies by including in its Planetary Systems team specialists both in the study of the atmospheres of planets in the Solar System and in the detection and characterization of exoplanets”, highlights Pedro Machado.

Marta Santos
Faculty of Sciences of the University of Lisbon
aci@fc.ul.pt

João Dias
Faculty of Sciences of the University of Lisbon
jadias@oal.ul.pt

Pedro Machado
Faculty of Sciences of the University of Lisbon
machado@oal.ul.pt

Marta Santos
Faculty of Sciences of the University of Lisbon
EurekAlert!