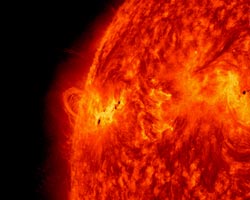 NASA's Solar Dynamics Observatory captured this image of the X1.2 class solar flare on May 14, 2013. The image show light with a wavelength of 304 angstroms. Credit: NASA/SDO <br>

This flare is classified as an X1.2 flare and it is the 18th X-class flare of the current solar cycle. The flare caused a radio blackout – categorized as an R3, or strong, on NOAA’s space weather scales from R1 to R5 — which has since subsided.

The flare was also associated with a non-Earth-directed CME. CMEs and flares are separate but related solar phenomena: solar flares are powerful bursts that send light and radiation into space; CMEs erupt with billions of tons of solar material. They often, but do not always, occur together.

Any time we can see a solar flare from Earth’s view, than at least some of its light and radiation must be directed at Earth. CMEs on the other hand may or may not be Earth directed. NASA observes CMEs, however, even when they are not traveling toward Earth, because they may impact spacecraft.

Experimental NASA research models show that this CME left the sun at around 745 miles per second, beginning at 10:18 p.m. EDT. It is not Earth-directed, however it may pass the Spitzer and Epoxi orbits, and their mission operators have been notified. If warranted, operators can put spacecraft into safe mode to protect the instruments from solar material.

Updates will be posted as necessary.