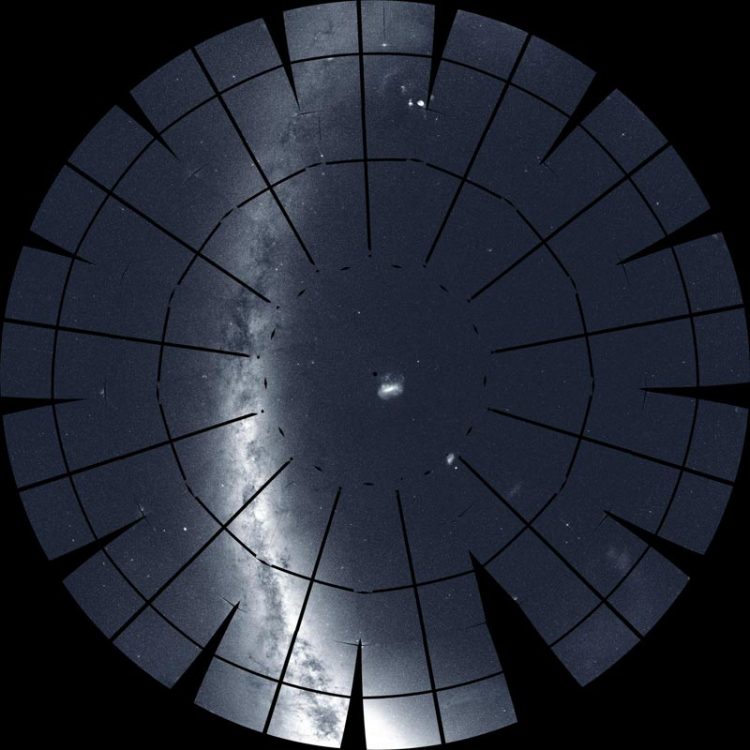 This mosaic of the southern sky was assembled from 208 images taken by NASA's Transiting Exoplanet Survey Satellite (TESS) during its first year of science operations, completed in July 2019. The mission divided the southern sky into 13 sectors, each of which was imaged for nearly a month by the spacecraft's four cameras. Among the many notable celestial objects visible is the glowing band (left) of the Milky Way, our home galaxy seen edgewise, the Orion Nebula (top), a nursery for newborn stars, and the Large Magellanic Cloud (center), a nearby galaxy located about 163,000 light-years away. The prominent dark lines are gaps between the detectors in TESS's camera system. Credit: NASA/MIT/TESS and Ethan Kruse (USRA)

“Analysis of TESS data focuses on individual stars and planets one at a time, but I wanted to step back and highlight everything at once, really emphasizing the spectacular view TESS gives us of the entire sky,” said Ethan Kruse, a NASA Postdoctoral Program Fellow who assembled the mosaic at NASA's Goddard Space Flight Center in Greenbelt, Maryland.

Within this scene, TESS has discovered 29 exoplanets, or worlds beyond our solar system, and more than 1,000 candidate planets astronomers are now investigating.

TESS divided the southern sky into 13 sectors and imaged each one of them for nearly a month using four cameras, which carry a total of 16 charge-coupled devices (CCDs). Remarkably, the TESS cameras capture a full sector of the sky every 30 minutes as part of its search for exoplanet transits. Transits occur when a planet passes in front of its host star from our perspective, briefly and regularly dimming its light.

During the satellite's first year of operations, each of its CCDs captured 15,347 30-minute science images. These images are just a part of more than 20 terabytes of southern sky data TESS has returned, comparable to streaming nearly 6,000 high-definition movies.

In addition to its planet discoveries, TESS has imaged a comet in our solar system, followed the progress of numerous stellar explosions called supernovae, and even caught the flare from a star ripped apart by a supermassive black hole. After completing its southern survey, TESS turned north to begin a year-long study of the northern sky.

TESS is a NASA Astrophysics Explorer mission led and operated by MIT in Cambridge, Massachusetts, and managed by NASA's Goddard Space Flight Center in Greenbelt, Maryland. Dr. George Ricker of MIT's Kavli Institute for Astrophysics and Space Research serves as principal investigator for the mission.

Additional partners include Northrop Grumman, based in Falls Church, Virginia; NASA's Ames Research Center in California's Silicon Valley; the Harvard-Smithsonian Center for Astrophysics in Cambridge, Massachusetts; MIT's Lincoln Laboratory in Lexington, Massachusetts; and the Space Telescope Science Institute in Baltimore. More than a dozen universities, research institutes and observatories worldwide are participants in the mission.