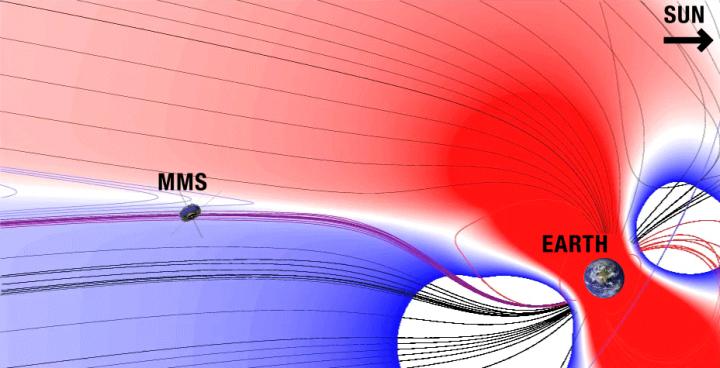 Some fly out into space, while others are funneled along magnetic field lines into Earth's upper atmosphere where they create auroras, or wreak havoc on power grids in the case of an extremely large event.

NASA's Magnetospheric Multiscale mission, or MMS, has been observing such explosions­ — created in a process called magnetic reconnection — for three years.

Recently, in the second phase of its mission, MMS saw reconnection in Earth's magnetotail — the part of Earth's magnetic environment trailing behind the planet, away from the Sun — with enough resolution to reveal its true nature more clearly. The results have been published in the journal Science.

Magnetic reconnection occurs around Earth every day due to magnetic field lines twisting and reconnecting. It happens in different ways in different places, with different effects. In the magnetotail, for example, the process can create aurora near Earth.

In the magnetotail the event watched by MMS was found to fling particles symmetrically, unlike how it does on the sunward side of Earth. Out front, the solar wind — a constant flow of charged particles from the Sun — pushes into Earth's magnetic field.

Because of their different densities, the two sides connecting are unequal, which causes magnetic reconnection to occur asymmetrically. On the backside, however, in the magnetotail, the explosion stems from an entanglement of two sets of — similarly intense — Earth field lines, so the particles are accelerated nearly the same in both directions.

Magnetic reconnection also happens on the Sun and across the universe — in all cases forcefully shooting out particles and driving much of the change we see in dynamic space environments — so learning about it around Earth also helps us understand reconnection in faraway places where it's impossible to measure directly.

The more we understand about different types of magnetic reconnection, the more we can piece together what such explosions might look like elsewhere, and how we can better prepare for extreme events here on Earth.