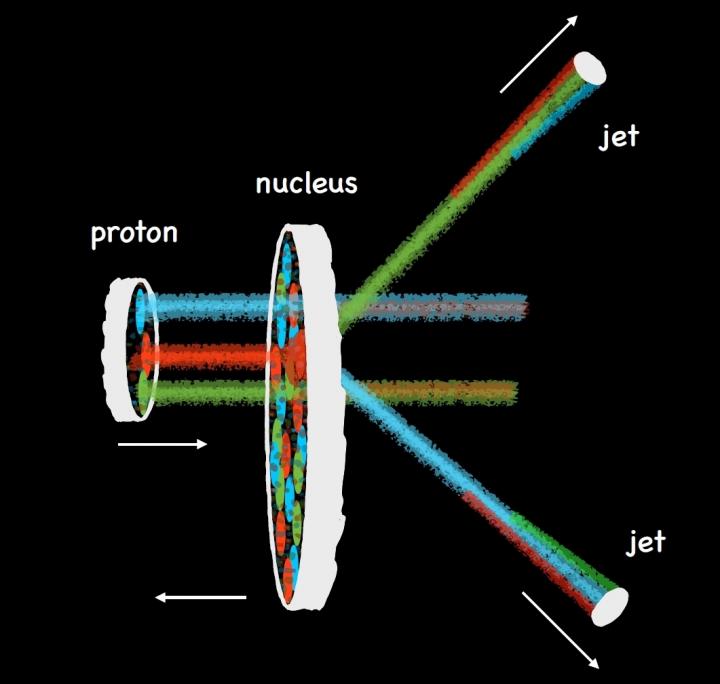 In proton-proton or proton-nucleus collisions, streams of secondary particles, known as jets, are produced. Some of these jets move sideways, but there are some that keep to a direction of motion close to the primary one. (Source: IFJ PAN, P. Kotko) Credit: IFJ PAN, P. Kotko

When a proton collides at high energy with another proton or atomic nucleus, the effect of the collision is a stream of secondary particles known as a jet in physicists' jargon. Some of these jets extend sideways, but there are some that keep to a direction of motion close to the primary one.

The details of the collision course are determined not only by the type of colliding particles, but also by many other factors, in particular the amount of energy. In Physics Letters B, a group of four scientists from the Institute of Nuclear Physics of the Polish Academy of Sciences (IFJ PAN) in Cracow has shown that at the highest energies obtained in the LHC accelerator, for an accurate description of the course of the collision of protons with protons or lead nuclei, additional phenomena need to be taken into account.

The ATLAS experiment at the LHC accelerator (CERN, Geneva) has been recording the collisions of two proton beams or a proton beam with a beam of lead nuclei travelling in opposite directions for years.

The Cracow-based researchers took a closer look at the latest data concerning high energy collisions reaching five teraelectron volts (i.e. thousands of billions of eV). Special attention was paid to those cases in which the jets running from the collision point moved in a forward direction, i.e. along the original direction of the beams.

“Neither protons nor the neutrons found in atomic nuclei are elementary particles. Usually, they are said to consist of three quarks, but this is a huge over-simplification. In fact, each proton or neutron is an extremely dynamic entity, filled with a constantly boiling sea of gluons, i.e. the particles that glue quarks together.

There is an interesting fact connected with this dynamism: depending on the behaviour of its component particles, i.e. partons, the proton can be sometimes more dense or sometimes less. And this explains why we find the cases with collisions with 'forward-directed' jets so interesting. They relate to situations where one proton is dilute, or behaves like a bullet, and the other one is dense, or behaves like a target”, explains Dr. Krzysztof Kutak (IFJ PAN).

In their model of high energy proton collisions, physicists from the IFJ PAN took into consideration two previously known phenomena. The first is connected with the fact that as the collision energy increases, the number of gluons formed inside protons increases too. It turns out that this process does not continue indefinitely. At a certain point, when the collision energy is great enough, there are so many gluons that they start to recombine with each other. A dynamic equilibrium is then created between the process of gluon production and their recombination. This effect is called saturation.

The second factor taken into account by the Cracow physicists was the Sudakov effect. This relates to situations in which the momentum of the difference of the momenta of generated jets is greater than the momentum of the partons initiating jet production. This seemingly contradictory result is in reality the result of quantum effects associated with the transfer of momentum between the partons involved in the collision. As a result, the probability of producing back-to-back jets is reduced and probability of production of jets at moderate azimuthal angel is enhanced.

“Both saturation and the Sudakov effect have been known for some time. However, their interplay was not addressed. The extreme conditions, that are created in forward-forward di-jets production motivated us to account for both effects”, says Dr. Andreas van Hameren (IFJ PAN). “Sudakov effect was usually taken into account in simulations. However once energy is high enough, the nonlinear effects turn on and one needs to account for saturation”, says Dr. Piotr Kotko (IFJ PAN, AGH).

This statement is supplemented by Dr. Sebastian Sapeta (IFJ PAN): “We ourselves took the Sudakov effect into consideration in one of our earlier papers, but only in the cases when some jets ran in a 'forward' direction and some remained in the central area of the detector, i.e. scattered at a large angle in relation to the direction of the beam. When describing such events, we could omit saturation”.

In their latest publication, the Cracow-based group proves that for the theoretical description to agree with experimental data, collisions at high energies require both of these phenomena to be taken into consideration simultaneously. This article is the first such complete description of the production of 'forward' jets in high-energy proton-proton and proton-nucleus (lead) high-energy collisions. Currently, the authors are working on an extension of the proposed formalism to collisions with the production of a greater number of jets and particles.

In proton-proton or proton-nucleus collisions, streams of secondary particles, known as jets, are produced. Some of these jets move sideways, but there are some that keep to a direction of motion close to the primary one. (Source: IFJ PAN, P. Kotko)