MOONRISE: : Bringing 3D-printing to the moon – Melting moon dust with the laser 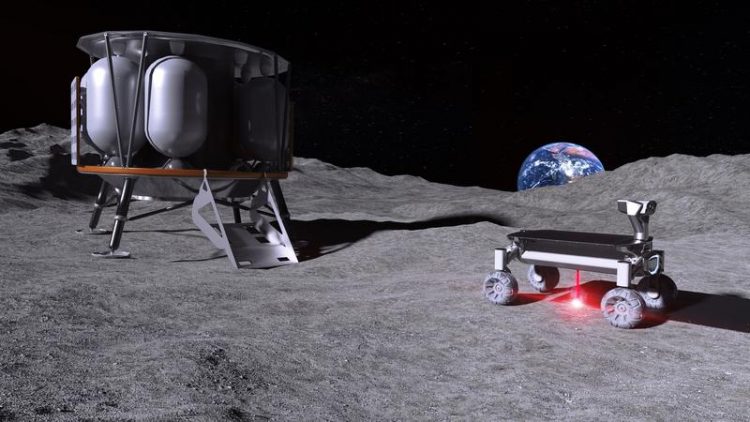 International space agencies and companies are not only planning to further explore, but to colonize space. The moon is of great importance as a research station and starting point for further expeditions.

However, the cost of flights and transports to the moon are enormous – a kilogram of loading capacity costs approximately 700,000 Euros. Therefore, infrastructure, components and devices, etc., would at best be manufactured directly on the Earth's satellite.

This is where the MOONRISE technology comes in: “We want to bring a laser system to the moon, which is supposed to melt moon dust, the so-called regolith. We would thus take the first step to take Additive Manufacturing, that is 3D printing, to the moon, “explains Niklas Gerdes from the LZH.

In that way, the scientists from IRAS and LZH want to prove the following: A laser system that weighs no more than three kilograms and has the volume of a large juice package can melt down local raw materials on the moon and convert them into versatile structures later.

The opportunity to fly their MOONRISE technology to the moon in 2021 with the first moon mission of the Berlin-based New-Space company PTScientists offers the researchers from Lower Saxony the unique opportunity to test their pioneering technology under real conditions.

Specifically, the scientists from Braunschweig and Hanover want to melt regolith on the lunar surface in a controlled manner using their laser system. After cooling, it is a solid body that would be suitable, for example, as a building material for the “Moon Village”, the vision of the global village on the moon as an outpost in space.

The targeted melting into predefined structures is monitored and recorded with high-resolution cameras. The findings from the experiments will have a fundamental impact on exploratory missions in general. If the experiment succeeds on the moon, the MOONRISE process can be scaled up to produce larger structures. Thus, in the long term, whole infrastructures such as foundations, paths, and landing surfaces could be built using the MOONRISE manufacturing technology.

Development of the laser system in a decisive phase

The project MOONRISE has been running for almost nine months. The results of the previous tests are promising: The laboratory setup is adapted; suitable, common laser hardware identified and tested, the optics designed and tested. The material that the scientists produce and use for the tests is becoming more and more similar to the regolith on the moon.

Currently, they are working on adapting the laser to the load compartment of the lunar vehicle, the so-called rover. The laser is integrated into a tunnel at the bottom of the rover. After the adjustments, the entire system is tested for its space suitability: because on the way to the moon, the laser system must withstand shocks and massive temperature differences.

Stefan Linke from IRAS explains: “The planned direct proof, that we are able to process lunar regolith with already available hardware components is crucial for the planning of future missions. Thus, larger and more sustainable projects on the surface of our cosmic neighbor are becoming possible. “

Future-oriented research projects are driving the spirit of scientists

The big day shall be in 2021: The MOONRISE laser of LZH and IRAS will be part of the moon mission of the PTScientists and sent to the Earth satellite, integrated into the rover, with a rocket. The ambitious and future-oriented research project is funded by the Volkswagen Foundation within the scope of “Open – for the Unusual”. With this program, the foundation supports extraordinary and daring projects for which no other donor can be found.

“The time is very short to make the process safe, to set up and test the appropriate laser while keeping the weight budget,” says Prof. Dr.-Ing. Ludger Overmeyer from the LZH. “But only those who try the impossible have the chance to achieve it.”

“IRAS and LZH have been working together on the underlying process for the MOONRISE technology since 2015. Now, through the project, we have the opportunity to show Additive Manufacturing outside of the earth and of the earth's orbit for the first time in history,” explains Prof. Dr.-Ing. Enrico Stoll from IRAS.

“Fundamentally new insights can often only be gained if scientists and their supporters are willing to take risks,” says Dr. Wilhelm Krull, Secretary General of the Volkswagen Foundation, and adds: “Even if the outcome of the experiments is still unclear, the foundation wants to resolutely set the path for daring research ideas like this one.”

Solid research with the potential for the extraordinary

Irrespective of the achievement of the moon missions-goal, the project will provide the scientific and technical basis for 3D printing on the moon. “With the newly opened research center HITec (Hannover Institute of Technology) and the “Einstein Elevator”, we have the necessary infrastructure at our disposal in the metropolitan region of Hanover-Braunschweig to carry out top space research in the future,” explains Prof. Dr.-Ing. Ludger Overmeyer. “With the Einstein Elevator, it is possible to simulate the ambient and gravitational conditions of the moon. Experiments in this large-scale research unit, under conditions such as on the moon, form a solid basis for the extraordinary project.”