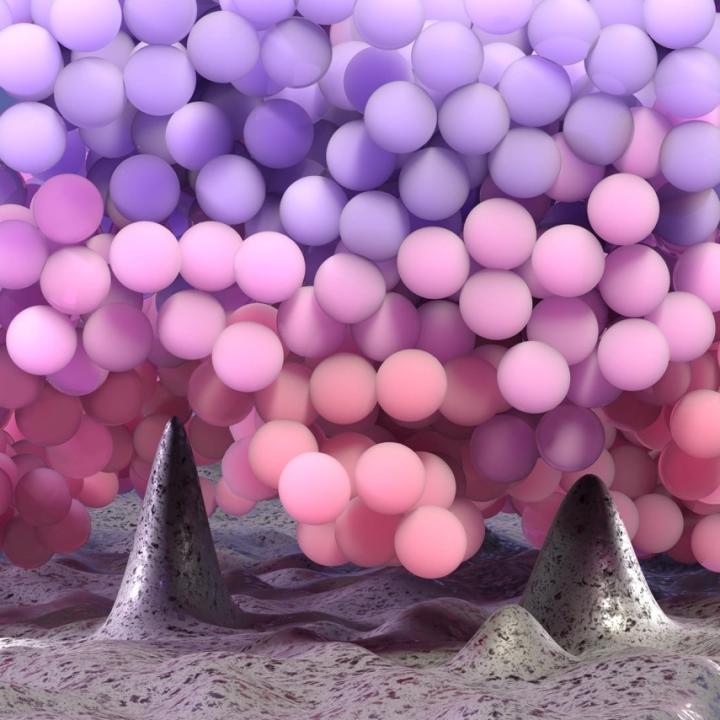 3D rendering of polymer chains near the asperities of a rough substrate. Faster molecules were pictured by warmer colors. Credit: © ULB Usage Restrictions: Editorial use only

At the size of smaller objects (1/100 – 1/1000 meter), Italians use pasta shapes with a rough surface, e.g. rigatoni, to make better adhesive surfaces for the tomato sauce and cheese. Till now, however, no experiment was able to test if the behavior of molecules really follows the same trend observed at human scale.

Their experiments clearly demonstrate that the common belief that surface irregularities allow molecules to better stick on a surface is actually wrong. When the size of the surface roughness, that is the average distance between the tiny hills and valleys present on the surface of a material, is reduced to few nanometers (1 nm = one billionth of a meter), molecules of P4ClS, a type of polymer, start to move faster.

Detecting molecular motion is not easy: molecules move fast (even up to 1 million and more steps per second) and their displacements are too small to be observed by microscopes.

Performing such experiments on a rough surface is even more complicated, because of its uneven character and by the difficulties on adjusting the size and distribution of the surface irregularities. The ULB team has been able to form rough surface of aluminum, by evaporating the metal in a controlled way.

To measure how fast molecules move, the researchers have applied weak electric fields and recorded how quickly the molecules responds to the stimulus.

Surprisingly, the team has noticed that molecules present near a rough substrate behave as if they were surrounded by less neighbors, which explains why they speed up instead of slowing down. This trend is in neat disagreement with the predictions of computer simulations, which proposed that molecules move slower near a rough wall.

Differently than what considered in simulations, polymer molecules do not enjoy sitting near rough substrate. Because of the way in which these molecules like to arrange themselves in the space, they prefer to move away from the asperities. The few molecules present near the asperities form less contact with the wall, can enjoy more free volume and, consequently, they move faster.

By sharing their results with a group of theoreticians of Dartmouth College (USA) led by Jane Lipson, the ULB team has been able to find a strong link between the way hills and valleys are organized on a rough surface and how molecules move.

The theoreticians have shown that a very small change in the free volume around a molecule induces a tremendous boost in mobility, and the prediction of their calculations are in perfect agreement with the experiments.

This paper shows that the current way we think at interfaces is not valid. This new molecular trend observed has thus huge impact at the level of fundamental science. The work of the ULB team could be exploited on a large number of applications.

Since almost a decade, several research groups have shown that properties of many thin coatings – such as flow, the ability to retain or be repel water, the velocity of formation of crystals – depend on the number of contacts between the film and its supporting substrate.

Till now, to modify this number it was necessary to change the type of molecules at the interface, often involving complex chemical reactions. The findings show that it is possible to tailor the performance of nanomaterials by simply changing the roughness of the surface. This method, hence, allows controlling the polymer layer without touching it, as by using a remote control!

This work was supported by the FNRS, the Federation Wallonie Bruxelles and the National Science Foundation.