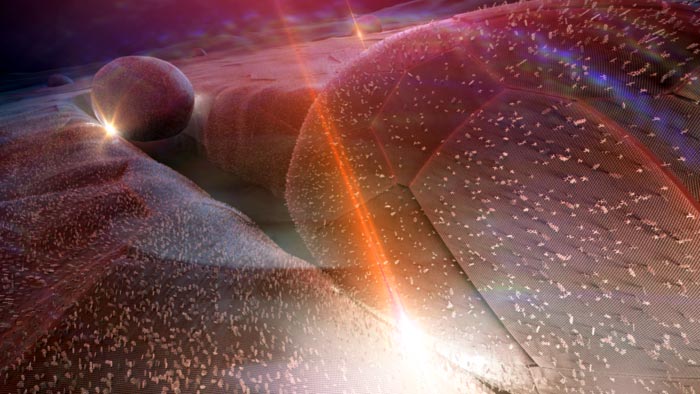 Artistic view of the nanoparticle-in-groove plasmonic cavities. Molecules cover the gold film and are sandwiched between the groove and the 150-nm large nanoparticle. The infrared signal of interest comes from below the substrate while the pump laser providing energy for upconversion comes from the top. Both are focused by the cavity onto the molecules, and interact with their internal vibrations to generate an upconverted copy of the infrared signal at visible frequencies (bright spot).
Credit: Nicolas Antille (http://www.nicolasantille.com) (Media purposes only)

Light is an electromagnetic wave: it consists of oscillating electric and magnetic fields propagating through space. Every wave is characterized by its frequency, which refers to the number of oscillations per second, measured in Hertz (Hz). Our eyes can detect frequencies between 400 and 750 trillion Hz (or terahertz, THz), which define the visible spectrum. Light sensors in cell phone cameras can detect frequencies down to 300 THz, while detectors used for internet connections through optical fibers are sensitive to around 200 THz.

At lower frequencies, the energy transported by light isn’t enough to trigger photoreceptors in our eyes and in many other sensors, which is a problem given that there is rich information available at frequencies below 100 THz, the mid- and far-infrared spectrum. For example, a body with surface temperature of 20°C emits infrared light up to 10 THz, which can be “seen” with thermal imaging. Also, chemical and biological substances feature distinct absorption bands in the mid-infrared, meaning that we can identify them remotely and non-destructively by infrared spectroscopy, which has myriads of applications.

Scientists at EPFL, Wuhan Institute of Technology, the Valencia Polytechnic University, and AMOLF in the Netherlands, have now developed a new way to detect infrared light by changing its frequency to that of visible light. The device can extend the “sight” of commonly available and highly sensitive detectors for visible light far into the infrared. The breakthrough is published in Science.

Frequency conversion is not an easy task. The frequency of light is a fundamental that cannot easily change by reflecting light on a surface or passing it through a material because of the law of energy conservation.

The researchers worked around this by adding energy to infrared light with a mediator:  tiny vibrating molecules. The infrared light is directed to the molecules where it is converted into vibrational energy. Simultaneously, a laser beam of higher frequency impinges on the same molecules to provide the extra energy and convert the vibration into visible light. To boost the conversion process, the molecules are sandwiched between metallic nanostructures that act as optical antennas by concentrating the infrared light and laser energy at the molecules.

“The new device has a number of appealing features,” says Professor Christophe Galland at EPFL’s School of Basic Sciences, who led the study. “First, the conversion process is coherent, meaning that all information present in the original infrared light is faithfully mapped onto the newly created visible light. It allows high-resolution infrared spectroscopy to be performed with standard detectors like those found in cell-phone cameras. Second, each device is about a few micrometers in length and width, which means it can be incorporated into large pixel arrays. Finally, the method is highly versatile and can be adapted to different frequencies by simply choosing molecules with different vibrational modes.”

“So far, however, the device’s light-conversion efficiency is still very low,” cautions Dr Wen Chen, first author of the work. “We are now focusing our efforts in further improving it” – a key step toward commercial applications.

Amplified signal and extreme sensitivity: on the trail of light dark matter particles 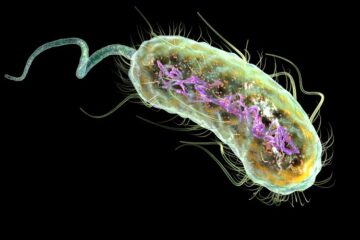 Scientists have pinpointed a gene that helps deadly E. coli bacteria evade antibiotics, potentially leading to better treatments for millions of people worldwide. The University of Queensland-led study found a… 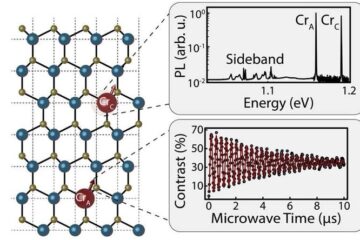 New qubits bring us one step closer to quantum networks

Chromium defects in silicon carbide may provide a new platform for quantum information. The Science Quantum computers may be able to solve science problems that are impossible for today’s fastest conventional…