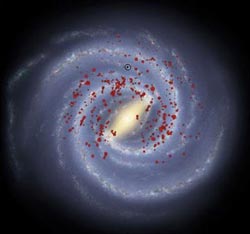 This shows the distribution of massive stars in the new study. Our location within the Galaxy is circled in black.<br><br>Credit: J. Urquhart et al. Background image by Robert Hurt of the Spitzer Science Center.<br>

The new research, which is published online today [17 December] in the Monthly Notices of the Royal Astronomical Society, is part of the RMS Survey, which was launched by academics at the University of Leeds.

Astronomers cannot see what our Galaxy, which is called the Milky Way, looks like because we are on the inside looking out. But they can deduce its shape by careful observation of its stars and their distances from us.

“The Milky Way is our galactic home and studying its structure gives us a unique opportunity to understand how a very typical spiral galaxy works in terms of where stars are born and why,” said Professor Melvin Hoare, a member of the RMS Survey Team in the School of Physics & Astronomy at the University of Leeds and a co-author of the research paper.

In the 1950s astronomers used radio telescopes to map our Galaxy. Their observations focussed on clouds of gas in the Milky Way in which new stars are born, revealing four major arms. NASA's Spitzer Space Telescope, on the other hand, scoured the Galaxy for infrared light emitted by stars. It was announced in 2008 that Spitzer had found about 110 million stars, but only evidence of two spiral arms.

The astronomers behind the new study used several radio telescopes in Australia, USA and China to individually observe about 1650 massive stars that had been identified by the RMS Survey. From their observations, the distances and luminosities of the massive stars were calculated, revealing a distribution across four spiral arms.

“It isn't a case of our results being right and those from Spitzer's data being wrong – both surveys were looking for different things,” said Professor Hoare. “Spitzer only sees much cooler, lower mass stars – stars like our Sun – which are much more numerous than the massive stars that we were targeting.”

Massive stars are much less common than their lower mass counterparts because they only live for a short time – about 10 million years. The shorter lifetimes of massive stars means that they are only found in the arms in which they formed, which could explain the discrepancy in the number of galactic arms that different research teams have claimed.

“Lower mass stars live much longer than massive stars and rotate around our Galaxy many times, spreading out in the disc. The gravitational pull in the two stellar arms that Spitzer revealed is enough to pile up the majority of stars in those arms, but not in the other two,” explains Professor Hoare. “However, the gas is compressed enough in all four arms to lead to massive star formation.”

Dr James Urquhart from the Max Planck Institute for Radio Astronomy in Bonn, Germany, and lead author of the paper, said: “It's exciting that we are able to use the distribution of young massive stars to probe the structure of the Milky Way and match the most intense region of star formation with a model with four spiral arms.”

Professor Hoare concludes, “Star formation researchers, like me, grew up with the idea that our Galaxy has four spiral arms. It's great that we have been able to reaffirm that picture.”

The University of Leeds is one of the largest higher education institutions in the UK and a member of the Russell Group of research-intensive universities.

The 2008 Research Assessment Exercise showed the University of Leeds to be the UK's eighth biggest research powerhouse and the University's vision is to secure a place among the world's leading universities by 2015.