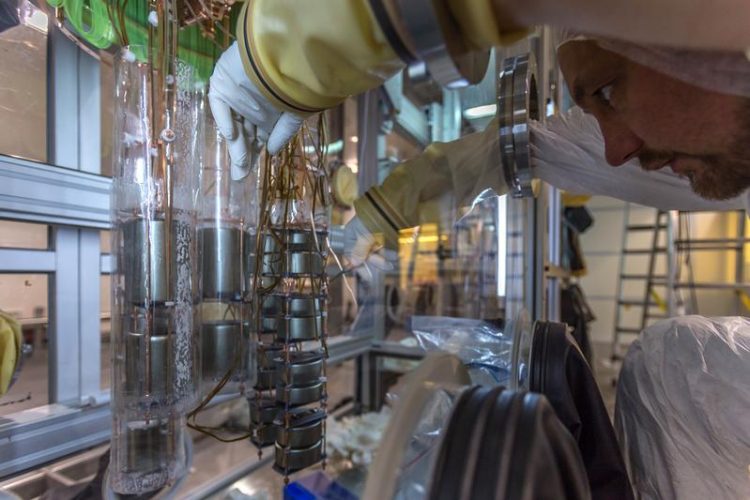 Working on the germanium detector array in the clean room of the Gran Sasso underground laboratory. J. Suvorov / GERDA

While the Standard Model of Particle Physics has remained mostly unchanged since its initial conception, experimental observations for neutrinos have forced the neutrino part of the theory to be reconsidered in its entirety.

Neutrino oscillation was the first observation inconsistent with the predictions and proves that neutrinos have non-zero masses, a property that contradicts the Standard Model. In 2015, this discovery was rewarded with the Nobel Prize.

Are neutrinos their own antiparticles?

Additionally, there is the longstanding conjecture that neutrinos are so-called Majorana particles: Unlike all other constituents of matter, neutrinos might be their own antiparticles. This would also help explain why there is so much more matter than antimatter in the Universe.

The GERDA experiment is designed to scrutinize the Majorana hypothesis by searching for the neutrinoless double beta decay of the germanium isotope 76-Ge: Two neutrons inside a 76-Ge nucleus simultaneously transform into two protons with the emission of two electrons. This decay is forbidden in the Standard Model because the two antineutrinos – the balancing antimatter – are missing.

The Technical University of Munich (TUM) has been a key partner of the GERDA project (GERmanium Detector Array) for many years. Prof. Stefan Schönert, who heads the TUM research group, is the speaker of the new LEGEND project.

GERDA is the first experiment to reach exceptionally low levels of background noise and has now surpassed the half-life sensitivity for decay of 10^26 years. In other words: GERDA proves that the process has a half-life of at least 10^26 years, or 10,000,000,000,000,000 times the age of the Universe.

Physicists know that neutrinos are at least 100,000 times lighter than electrons, the next heaviest particles. What mass they have exactly, however, is still unknown and another important research topic.

In the standard interpretation, the half-life of the neutrinoless double beta decay is related to a special variant of the neutrino mass called the Majorana mass. Based the new GERDA limit and those from other experiments, this mass must be at least a million times smaller than that of an electron, or in the terms of physicists, less than 0.07 to 0.16 eV/c^2 [1].

Consistent with other experiments

The tritium decay experiment KATRIN at the Karlsruhe Institute of Technology (KIT) is set-up to measure the neutrino mass with a sensitivity of about 0.2 eV/c^2 in the coming years. These masses are not directly comparable, but they provide a cross check on the paradigm that neutrinos are Majorana particles. So far, no discrepancy has been observed.

From GERDA to LEGEND

During the reported data collection period, GERDA operated detectors with a total mass of 35.6 kg of 76-Ge. Now, a newly formed international collaboration, LEGEND, will increase this mass to 200 kg of 76-Ge until 2021 and further reduce the background noise. The aim is to achieve a sensitivity of 10^27 years within the next five years.

GERDA is an international European collaboration of more than 100 physicists from Belgium, Germany, Italy, Russia, Poland and Switzerland. In Germany, GERDA is supported by the Technical Universities of Munich and Dresden, the University of Tübingen and the Max Planck Institutes for Physics and for Nuclear Physics. German funding is provided by the German Federal Ministry of Education and Research (BMBF), the German Research Foundation (DFG) via the Excellence Cluster Universe and SFB1258, as well as the Max Planck Society.

[1] In particle physics masses are specified not in kilograms, but rather in accordance with Einstein’s equation E=mc^2: electron volts [eV] divided by the speed of light squared. Electron volts are a measure of energy. This convention is used to circumvent unfathomably small units of mass: 1 eV/c^2 corresponds to 1.8 × 10^-37 kilograms.

https://science.sciencemag.org/lookup/doi/10.1126/science.aav8613 Link to original publication (available after lift of embargo: Sept. 5, 2019, 8 pm)
https://www.tum.de/nc/en/about-tum/news/press-releases/details/35672/ Link to press release on the TUM-homepage (available after lift of embargo)
https://www.mpi-hd.mpg.de/gerda/home.html Homepage of the GERDA Collaboration