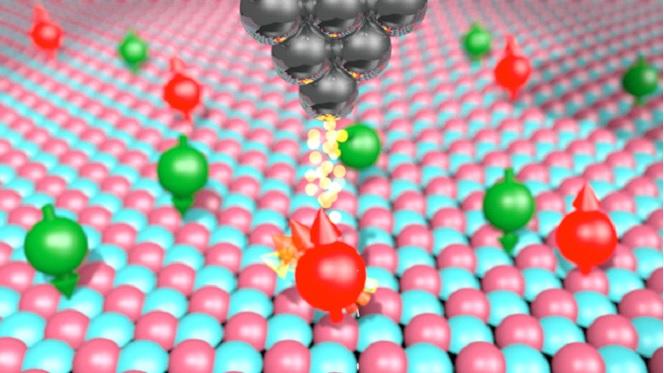 The metallic tip of a scanning tunneling microscope is used to drive the magnetic quantum state of an iron atom into a different direction. Credit: Institute for Basic Science (IBS)

Their findings, published in the journal Science Advances, show that the loss in quantum state superposition is mainly caused by nearby electrons that the researchers injected with extreme control into the iron atom.

“We found that almost every electron destroys the quantum state,” explains Dr. Philip Willke, first author of the study. “In addition, we found that nearby fluctuating magnets had a similar negative impact. While our experiments decreased the state of superposition on purpose, it also gave us valuable clues on how to improve atoms' quantum states.”

Andreas Heinrich, Director of the IBS Center for Quantum Nanoscience added: “Understanding these destructive interactions allows us to avoid them in future experiments and improve the performance of magnetic quantum sensors that, in this case, only consist of a single atom.”

Quantum computers could also potentially benefit from this research. While still in early development, quantum computation promises to vastly outperform classical computers in tasks such as database management, search and optimization. At its core lies the fact that a quantum system can be in two quantum states at the same time; an effect called the superposition of quantum states. However, when such a quantum system interacts in particular environments – either through desired or undesired contact – this superposition of states is easily destroyed. This principle makes it crucial for quantum nanoscientists to understand and control these processes.

The IBS Center for Quantum Nanoscience, housed on the campus of Ewha University in Seoul, is a groundbreaking research center merging Quantum and nanoscience to push the boundaries of human knowledge in basic research. Powered by Korea's Institute for Basic Science (IBS), which was founded in 2011, the Center for Quantum Nanoscience researches the behavior of atoms and molecules on surfaces; excelling the potential of the smallest building blocks humans can use to created engineered Quantum. Lead by world-renowned physicist Andreas Heinrich (A Boy and His Atom, IBM, 2013), QNS is dedicated to bringing top scientists from around the world to their state-of-the-art facility to conduct research that will unlock the secrets of the quantum universe.