Magnetic nano-imaging on a table top 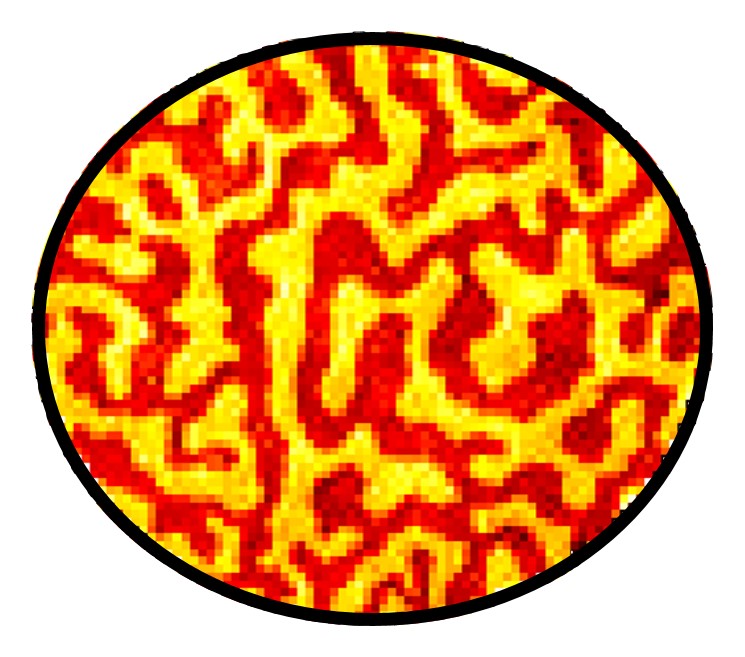 An image of worm-like magnetic domains in the sample, retrieved algorithmically from the scattered light. Photo: University of Göttingen

Just like flash photography can “freeze” and capture the motion of a child running in a dimly lit room, lasers can freeze motion as fast as electrons orbiting atoms. In a process called high-harmonic generation (HHG), lasers can form extremely short pulses with wavelengths down to one nanometer, which would enable observation in slow motion of a movie with nanometric-spatial and femtosecond-temporal resolution – one millionth of a millimeter and one millionth of a billionth of a second.

A research team at the Universities of Göttingen and Augsburg in Germany in collaboration with Technion in Israel have now used femtosecond HHG pulses for the first time to capture images of magnetic domains. Published in the open-access journal Science Advances, the work establishes a highly-sought after technology: magneto-optical nano-imaging in a table-top scheme.

Magnetic orientation at the nanoscale has immense technological importance, serving as a basis for new generations of storage and logic devices. Understanding and controlling dynamic microscopic phenomena requires means to image rapid magnetic phenomena, such as switching processes.

Circularly polarized light is sensitive to the magnetization of materials and can thus be used to conduct microscopy of magnetic structures. Unfortunately, in order to achieve a resolution in the relevant range of a few tens of nanometers, very short wavelength is required. As a result, corresponding high-resolution microscopes previously required x-radiation from large particle accelerators such as synchrotrons and free-electron lasers.

The researchers addressed the long-standing challenge of achieving magnetic imaging with nanometric resolution using a laboratory-scale source of short-wavelength pulses of light, namely high harmonics. Importantly, the image resolution they reached, below 50 nm, is competitive with the resolution achievable in large accelerators.

The first key ingredient was the use of circularly-polarized high harmonics, for which a technique recently developed at Technion was employed. Moreover, as the magnetization-related signal is much smaller than typical non-magnetic effects, identifying the magnetic contrast may be described as searching for a needle in a haystack.

However, the team employed a trick that enhances the magnetic signal: Part of the light beam passed through and scattered off the magnetic sample, while another part was guided through auxiliary channels nearby. The interference between the magnetically scattered light and the light passing the channels increased the signal approximately 10-fold. Combining the auxiliary illumination with a control of the circular polarization rotation (clockwise or anti-clockwise) amplified and isolated the weak magnetic scattering – loosely speaking, making the “hidden needle” glow.

The team, led by Professor Claus Ropers in Göttingen, believe that numerous aspects may benefit from their demonstrated imaging approach. “Imaging is a very basic and versatile use of light,” says author Dr. Ofer Kfir. “Polarization contrast in light microscopy is already very powerful. Much higher resolutions are now possible by the shorter wavelengths, and this really gives us new access to nanoscale phenomena in magnetism and other areas.

The concept of signal enhancement by auxiliary light reduces the requirements on a source’s brightness, which makes the approach even more widely applicable.” Author Dr. Sergey Zayko notes another immediate goal for the future: “In addition, the femtosecond pulse duration of the HHG source will provide us with direct ultrafast movies of magnetic phenomena on the nanoscale.”