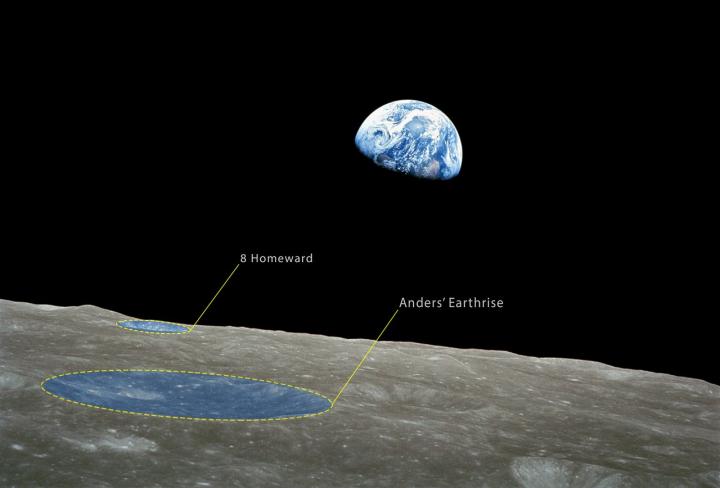 The Earthrise color photograph taken by astronaut William Anders. It depicts the moment that our shiny blue Earth came back into view as the spacecraft emerged out of the dark from behind the grey and barren Moon. This is arguably the most famous picture taken by Apollo 8. It became iconic and has been credited with starting the environmental movement. Two of the crates seen in this photo have just been named by the Working Group for Planetary System Nomenclature (WGPSN) of the International Astronomical Union. Credit: NASA/IAU

Since the Moon is tidally locked to the Earth — it always has the same side facing the Earth — the Earth will never appear to rise above the surface to someone standing on the lunar farside. Orbiting around the Moon, however, gave the Apollo 8 astronauts, Frank Borman, James Lovell, and William Anders this stunning view, before they safely returned home to Earth.

The Apollo 8 mission took place from 21 to 27 December 1968. After completing 10 orbits around the Moon on Christmas Eve, broadcasting images back to Earth and giving live television transmissions, the crew returned to Earth and landed in the Pacific Ocean.

The Working Group for Planetary System Nomenclature (WGPSN) of the International Astronomical Union, who named the craters, is the authority responsible for the naming of planetary features in our Solar System. The two named craters were previously designated by letters.

The IAU is the international astronomical organisation that brings together more than 13 500 professional astronomers from more than 100 countries worldwide. Its mission is to promote and safeguard the science of astronomy in all its aspects through international cooperation. The IAU also serves as the internationally recognised authority for assigning designations to celestial bodies and the surface features on them. Founded in 1919, the IAU is the world's largest professional body for astronomers.