Home / Physics and Astronomy / Looking for dark matter with the universe's coldest material
04.05.2020

Looking for dark matter with the universe's coldest material 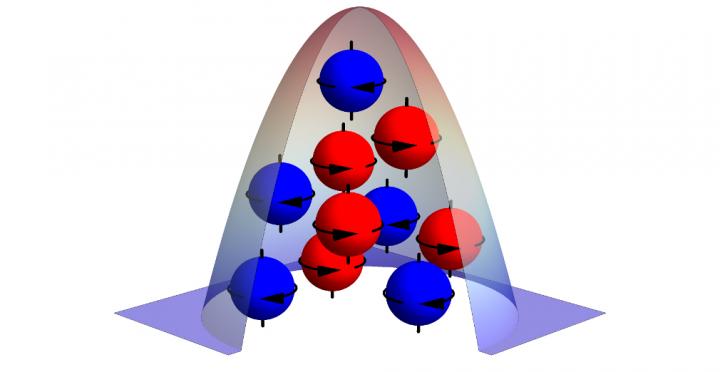 Magnetism is carried by virtual photons, whereas “exotic” spin-dependent forces would be carried by virtual axions (or axion-like particles). These forces would act on both electrons and nuclei, and would be produced not just by magnets, but also by ordinary matter. To know if axions do exist, a good way is to look and see if nuclei prefer to point toward other matter.

Several experiments are already searching for these forces, using “comagnetometers”, which are paired magnetic sensors in the same place. By comparing the two sensors' signals, the effect of the ordinary magnetic field can be cancelled out, leaving just the effect of the new force.

Bose Einstein Condensates (BECs) are gases cooled nearly to absolute zero. Because BECs are superfluid, their constituent atoms are free to rotate for several seconds without any friction, making them exceptionally sensitive to both magnetic fields and new exotic forces.

A BEC is also very small, about 10 micrometers in size. To make a BEC comagnetometer, however, requires solving a tricky problem: how to put two BEC magnetometers in the same small volume.

In their study, Gomez and his colleagues report that they were able to solve this problem by using two different internal states of the same 87Rb BEC, each one acting as a separate but co-located magnetometer.

The results of the experiment confirm the predicted high immunity to noise from the ordinary magnetic field and the ability to look for exotic forces with much shorter ranges than in previous experiments. Besides looking for axions, the technique may also improve precision measurements of ultracold collision physics and studies of quantum correlations in BECs.

Link to the research group at ICFO https://www.icfo.eu/lang/research/groups/groups-details?group_id=20