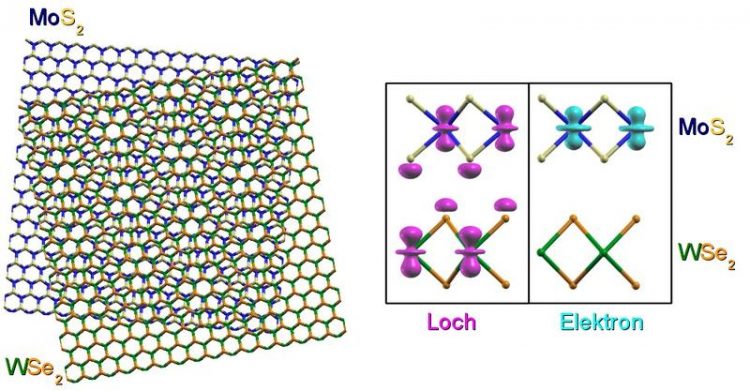 When light of specific frequency hits a semiconductor crystal, it is absorbed and produces a excitation, a state of higher energy. In solar cells, this energy can be converted into electricity and used. In two-dimensional crystals, which consist of only a few atomic layers, so called “excitons” are the protagonists of these processes: These excitations from light incidence consist of one particle of positive charge and one of negative charge.

Yet, two-dimensional crystals host a sheer zoo of excitons, making it hard to tell the kind of excitons dealt with in specific situations. Researchers of TU Dresden, in collaboration with an international team, now identified the nature of interlayer excitons in two-dimensional crystals. Their findings were published in the journal Nature Physics.

The two-dimensional crystals are a kind of “sandwich” made of single layers of molybdenum disulfide and tungsten diselenide. Each layer has a thickness of only three atoms. In the laboratory, the layers are stacked on each other one by one by hand. “What makes interlayer excitons so special is the two charged particles being separated in space. So far, it was assumed that the positive one is located in the Tungsten diselenide and the negative one in the molybdenum disulfide,” says Dr. Jens Kunstmann from the Chair of Theoretical Chemistry of TU Dresden.

“We were now able to clearly show that particles of positive charge can be found in both layers, and thence, the interlayer excitons are bound to each other in a much stronger way than presumed formerly.” Theoretical as well as experimental groups were working hand in hand in the course of this global collaboration.

The Dresden group contributed theoretical calculations and analyses in cooperation with Prof. Andrey Chaves of the Universidade Federal do Ceará in Fortaleza, Brazil, and Prof. David R. Reichman of the renowned Columbia University in New York City, USA. The experiments were conducted by the group of Prof. Tobias Korn of the Universität Regensburg: among them Fabian Mooshammer and Philipp Nagler, who contributed to this research in the course of their master and doctoral theses.

“We are still at the beginning, we still don’t know for sure how interlayer excitons in other two-dimensional crystals look like,” Dr. Kunstmann points out. “But we are fascinated by these excitons anyway. The spatial separation of the charges could enable the condensation of excitons to a macroscopic quantum state, as well as the construction of highly efficient solar cells.”

Complete picture caption: A two-dimensional crystal from molybdenum disulfide (MoS2) and Tungsten diselenide (WSe2) (left: top view, right: side view). Light can produce interlayer excitons in these crystals, which are fascinating excited states, consisting of one particle of positive charge and one of negative charge. The coloured outlines in the right picture represent the probability of the particles‘ places.